“That SDG&E would break rules and rush to put a faulty helicopter in the air again is just unconscionable...I continue to question the CPUC's monitoring of the project and again call on CPUC commissioners and the governor's office to closely evaluate these troubling events.” - Supervisor Dianne Jacob 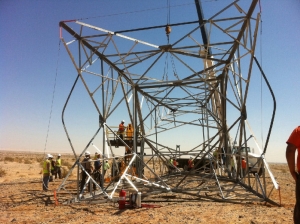 "While the CPUC’s Environmental Monitor was onsite at the time of the first incident, no immediate notification of this serious incident was provided by SDG&E to the CPUC or BLM, and no written information was provided," reads a Violation of Communications Protocol notice sent June 15 by the CPUC to the utility.  "The first incident is considered to be a regrettable, but unforeseeable event resulting from mechanical malfunction. The communication with CPUC and BLM was severely deficient. After our inquiries about the June 7th incident, the CPUC Monitoring Team was informed by SDG&E field representatives that SDG&E and FAA, were investigating the incident. The agencies assumed that information would be provided before the Skycrane would be returned to service. No such information was provided."

The notice continues, "Of greatest concern to the CPUC and BLM is that the Skycrane was returned to service on June 10 without prior notification to the agencies, without SDG&E providing a detailed explanation of the causes of the initial incident, and without explanation to the agencies of the repairs and testing procedures implemented prior to the decision to use the Skycrane again. Aspen monitors were made aware of this decision only on the morning of June 10, when the daily schedule as provided to the Monitoring Team indicating that the Skycrane would be in service that morning. No advance notification was provided to the CPUC, BLM, or the monitoring team that this would be happening, and no explanation was provided to explain the cause of the June 7 incident and any corrective measures implemented to ensure that safe operations could resume. At 8 a.m. on June 10, the second incident occurred. For this incident, SDG&E staff informed the Aspen monitor and the CPUC Project Manager in a timely manner. However, there was no written report provided."

Supervisor Dianne Jacob issued a blistering statement in response to the news.

“That SDG&E would break rules and rush to put a faulty helicopter in the air again is just unconscionable. The utility's cowboy antics continue to raise public safety concerns. SDG&E must not be allowed to police itself. We know what happens when regulators do nothing. We saw the oil well blow up in the gulf last year. People died and businesses were crippled. I continue to question the CPUC's monitoring of the project and again call on CPUC commissioners and the governor's office to closely evaluate these troubling events.”

A replacement helicopter with older, non-digital hook controls is currently en route to San Diego, however the FAA plans to observe lift tests and will determine whether to authorize the aircraft to engage in construction lifts for the Powerlink project, the report states. In addition, the CPUC concludes, “The replacement helicopter will not be put into service until CPUC is satisfied that all appropriate inspections and tests have been completed dto ensure that the hook system operates safely and as designed.” Moreover, the report adds, “SDG&E is required to submit Congested Area Plans (CAPs) for FAA approval before operating in congested areas. These lay out all procedures to follow.”

On June 7, Four lifts had been completed successfully. But on the fifth lift, with the load 150 in the air, “all four hooks securing the payload made an uncommanded release” sending the tower section crashing to the ground 20-30 feet north of Evan Hughes Highway on U.S. Bureau of Land Management property. According to the CPUC report, the pilot notified the FAA and Erickson Air Crane’s troubleshooting team began inspections. “They found suspect wiring associated with the release control at a bulkhead connection point, which they removed and rewired,” the report stated, adding that the FAA was told of tests planned the next day.

Those tests, conducted by SDG&E, lifted concrete blocks to simulate a 16,000 pound load. “During those tests, the system operated as design,” the report notes adding that the tests included shaking the helicopter with no problems reported. “SDG&E released the aircraft to begin flying again Friday morning and they let FAA know this.” FAA spokesman Ian Gregor said the FAA did not require the air crane to be taken out of service after the first incident and since SDG&E took it out of service on its own, no approval by the FAA was required to be back in the air. He added that Erickson has been "cooperating fully" with the FAA on its investigation.

There were no injuries in either of the above incidents or adverse impacts on sensitive environments, however SDGE will be required to do site restorations. The accidents have proven costly to SDG&E in delaying construction as well as damages to the towers.
An article at Vertikal, a site devoted to the cranes and lifting industries, however, called it “incredulous” that “ after such a serious near miss, not to mention the cost resulting from the damage to the dropped load, an almost identical accident occurred just three days later on the same project.” Moreover the site expressed astonishment that the incidents could happen in the first place. “Ground based cranes that use automatic hooks are usually required to have back-up or redundant systems,”Vertikal observed. “The hooks cannot usually release a load when they have weight on them, due to a positive mechanical interlock.”

ECM has asked Erickson for comment but has not received a response by press deadline. However Udo Rider, chief executive officer of Erickson, has said that “Erickson Air-Crane is working very closely with an Diego Gas and Electric to resolve the issue with a goal of maintaining the highest levels of safety and reliability,” according to a press release issued by SDG&E after the second incident.

SDG&E president and CEO Mike Niggli concluded in a press statement that “These recent incidents are unacceptable. We hold ourselves and the helicopter manufacturer accountable for safe construction practices and resolve to take steps ensuring that incidents like these will not happen again.”