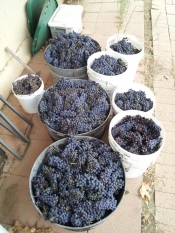 October 12, 2014 (San Diego’s East County) – Small wineries have been flourishing since our County passed its boutique winery ordinance.  Unlike most small businesses, wineries that grow their own grapes can’t generate profits for several years, since it takes that long after planting vines before a quality wine can be produced.  Many local wineries have relied on friends and other volunteers to pick grapes, help with events and other tasks.

But California labor law prohibits for-profit businesses from using volunteers.  Workers are required to be paid and the employer must purchase workers’ compensation insurance.  Now, the California Division of Labor Standard Enforcement is putting the squeeze on those who don’t comply.  Westover Winery in Livermore Valley has been assessed over $115,000 in fines for allowing adult students in a winemaking class to get free hands-on experience at the winery.

“We really didn’t need all the volunteers that we had, but they enjoyed being part of our clubs and they loved helping out,” says William Smyth, owner of Westover Winery, WineBusiness.com reports. “My licensed winery consultant handled all the scheduling, and even she didn’t know about this law.”

Smyth agreed to provide back-pay to the workers, many of whom are retirees who have said they don’t need or want to be paid. But when some of the volunteers returned the money, voicing outrage at the state’s action, the winery owner was fined even more--since it’s illegal for an employer to take money back from an employee.

Smyth says he is being forced to shut down his winery rather than file a costly and time-consuming appeal that he could lose. His winery was largely a hobby and he has stated that he can’t  afford to stay in business and pay six-figure salaries, since his profit last year was only $11,000.

Wendell Lee, attorney for the Wine Institute, is advising wineries to speak with a labor attorney and take steps to become compliant with the law if they have violated it.  He recommends that wineries put all volunteers on the payroll and obtain employment and worker’s compensation for all workers.

But that could be a costly proposition—too costly for some Mom and Pop wineries to afford, critics contend.

Meanwhile Smyth hopes to help other wineries by asking his local representatives to amend state law and exempt small wineries and other small businesses from the law, allowing them to use volunteers as nonprofits and government entities can do, under certain circumstances.

He also wants to see businesses given a cease and desist order and the opportunity to become compliant before any fines are levied. In addition he would like to see the Labor Department do more to outreach and inform wineries about the law.

Such a measure could face opposition from labor, however, and raise objections to granting exemptions from state labor law to some types of businesses but not others.