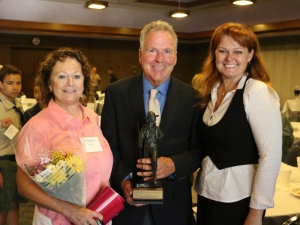 Photo: Craig McClain with his wife, Kathleen and daughter, Deanna

August 28, 2015 (El Cajon)--The Boy Scouts of the Heartland District in East County honored Craig McClain of Boys to Men Mentoring at a luncheon on August 26th at the Ronald Reagan Community Center in El Cajon.

Craig teamed up with Joe Sigurdson in 1996 to form the program from his house in La Mesa that targets at risk teenage boys, most without a father in their lives.  Since that time, the Boys to Men has expanded to 17 cities throughout the United States and now has 15 international centers in Canada, Europe, Australia, New Zealand and South Africa.

Craig was a Boy Scout himself and stressed the many things he learned in Scouting that helped shape his life, including a challenging backpacking trip to the renowned Philmont Scout Ranch.

The Chairman of the event was Greg Brown, founder of the East County Posse and from a Scouting family himself, including a father and son who were both Eagle Scouts. The Master of Ceremonies was Mark Neville, the Executive Director the Holiday and Poinsettia Bowl games. There were 130 people in attendance.

In 2014, there were nearly 1,700 scouts participating in scouting in the Heartland District which area includes El Cajon, Santee, Lakeside, Alpine and Jamul. Those scouts logged over 9,700 Community service hours. They also spent a total Of 4,112 nights camping….which is over 11 years’ worth of nights when strung back to back. 43 of our Scouts also attained Scouting’s highest rank, Eagle Scout.