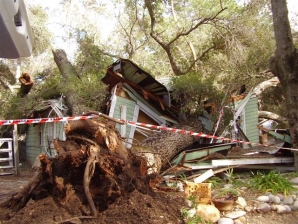 February 7, 2010 (Ramona) -- It's a good thing residents of this Ramona home weren't hosting a SuperBowl party this afternoon, when a massive tree scored an unforeseen touchdown.

At 1:30 p.m. Cal Fire responded to a report of a tree fallen into the residence, located in the 13000 block of Fernbrook. When firefighters arrived, they found a giant oak tree had crashed down, completely destroying the entire structure.

Fortunately, firefighters were able to determine that nobody was inside the home when the giant tree fell.

Firefighters estimate the tree was six-feet-wide, 30 feet tall, and 150 years old—dating back nearly to the gold rush era.

A neighbor, Rick Morgal, told a Union-Tribune reporter that SDG&E trimmed the tree two or three months ago, leaving it unbalanced and lopsided. After recent rains, the tree began to lean and was pushing against the porch. He said the homeowners notified SDG&E and that workers who inspected told the homowoners to vacate the home.

Homeowners complied, but reported power lines were being pulled down by the leaning tree. According to Morgal, SDG&E workers came out todayl, cut lines leading to the tree, and then it toppled over.

According to the Union-Tribune, SDG&E denies that its employees told residents to leave the home, but admits that its utility crew disconnected lines running from power pole to the house. Art Larson, a utility company spokesperson, called the matter “just an unfortunate situation.”

But Morgal blames SDG&E for severely trimming trees as a means of lessening dangers posed by wildfires. “This beautiful little house amongst the oaks is a victim of SDG&E policies,” he concluded.