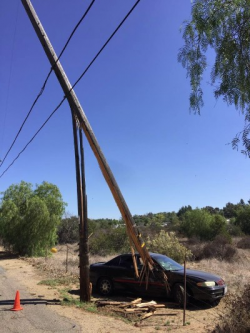 The following details are based on a combination of California Highway Patrol incident reports online and eyewitness accounts published by the Deerhorn Valley Antler and its Antler Alerts.

Monday, October 10, 2016: A vehicle crashed into the Rancho Jamul Ecological Reserve driveway fence around 11 p.m.  According to the Antler, “two patrons coming from the casino” on opening day had “admitted to drinking but were not cited [as] ‘under the influence.’”  ECM has asked CHP for details.

Thursday, October 13:  A rollover wreck between the casino and the entrance to Rancho Jamul Ecological Reserve was reported around 4 a.m., about a mile east of the casino.  The Antler editor calls this the “deadliest section” of highway since it is a straight shot, so people drive fast, but there is no shoulder and power poles are close to the roadway.

Friday, October 14, 2016: A crash occurred on westbound 94 at Vista Sage, between the Jamul Liquor store and 7-11, where a vehicle rolled off the roadway and into a ditch after hitting a stop sign and about 60 feet of chain link fence around 9 a.m.  Antler editor Kim Hamilton notes this was one of the intersections “we were promised would be improved before the casino opened. ”A medical unit was reportedly dispatched.”  She adds, “Witness reports say that the driver, a casino employee, was on the phone.”

Friday afternoon around 1:29 p.m., a vehicle struck a power pole at State Route 94 west of Honey Springs Road, causing an extended power outage in the area.  First responders called in medical support after arriving on scene.

Friday night at 6:33 p.m., a two-vehicle collision involving a white Toyota Tundra and a maroon PT cruiser partially blocked State Route 94 at the junction of 94 and Steele Canyon, on the night of Steele Canyon’s homecoming game and dance.

On Saturday, October 15, a crash on Proctor Valley Road and Pioneer closed the road for two hours and again knocked out power to the area.

It is unclear how many of these accidents were directly related to the casino, which also caused traffic delays of several hours on opening day last Monday.  Highway 94 had a high rate of crashes even before the casino opened.

It is also uncertain whether there may have been even more crashes than those listed above, since CHP sends out no press releases for accidents in this area and since accidents disappear off the incident page swiftly, making it difficult for media or concerned citizens to monitor crashes, particularly those occurring overnight.  ECM has asked CHP to provide details on all crashes and any DUI citations during the first week of the casino’s operation along state route 94 from Otay Lakes Road to Rancho San Diego.

The tribe has committed $23 million to traffic mitigation.  But only a section in front of the casino has been completed, along with adding a signal light and turn lanes.  The casino general manager has indicated other improvements are dependent on land acquisitions and will take time.

But according to the Antler, promises were made to improve these intersections before the casino opened:

The County Board of Supervisors (BOS), in granting approval (with Dianne Jacob opposed) added several additional intersections including:

The Antler has published the following action item advising ways that concerned citizens can take action:

CO BOARD OF SUPERVISORS

BOS—Why did you allow this dangerous situation by approving the Memo of Understanding?

ABC—Why did you issue an unrestricted liquor permit and multiply the risks to our families by many times? We will be there at your meeting in November.

CALTRANS—Where are the promised road improvements?  Don't use the lawsuit excuse.  You allowed this casino to open, risking the lives of every driver on SR-94, with just one ineffective signal at the Casino Entrance.

Use these links and emails to tell these folks every day what JIV, PENN, CalTrans, and the ABC have done to Jamul.  The ABC hearing on a permanent liquor license is scheduled next month.  Let's educate these people in their ivory offices about what is happening to us NOW.  And every day.  24/7

COUNTY SUP's WHO APPROVED THE AGREEMENT (MOU) WITH JIV

Your government doesn't care. Move on. There is nothing to see here.