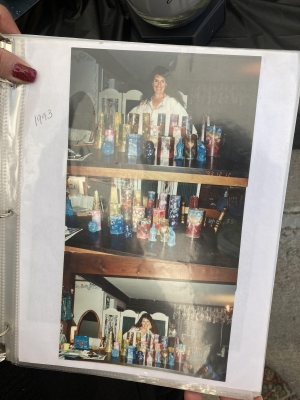 Photo:  Kristi from Custom Candles holds up a photo of her handmade candles

December 6, 2022 (Ramona) -- East County artists of all kinds and wine makers who are passionate about what goes into your glass helped to bring in the 10th annual Ramona Art and Wine Festival which was held at Ramona Ranch.

The festival had 50 different vendors this year showing off the best of East County’s art and wine. East County Magazine spoke with some of the artists and wine makers in an interview--each one revealing their inspiration, knowledge, and love of the community. 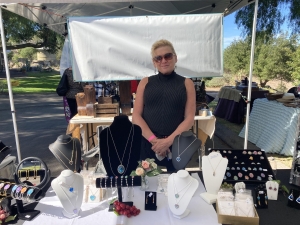 One of the artists is a jewelry designer based out of El Cajon, Denise Maize of Maize Jewelry (photo, right). This was her fifth year participating in the festival and last year was her biggest show yet. “What I do is I work with other artists and they have paint droppings and that’s what these all are,” she said. “I manipulate the paint droppings, capture them and then I manipulate them under glass then I make jewelry out of them. I like to recycle I like to say I’m saving the earth one piece of jewelry at a time.”

How long a piece will take for her to make depends on the way she gets her paint, if it is wet or dry, but usually takes about two days. Since paint droplets are never the same patterns each jewelry piece is unique.

Maize explained how she began her journey as a jewelry maker. “I was always into rocks and gems. As a kid I used to go out to the desert with my dad and find rocks and gems and minerals. I started working with that and when I was working with a friend that was doing painting that’s when I got the idea for trying the jewelry out with the paint drops. I just fell in love with it.”

Another craftsperson, who has been making candles for years, was a first-time vendor for the Art and Wine Festival. Kristi from Custom Candles (photo, above left) had a booth of her handmade candles each one in their own unique refurbished holder. Her collection included candles ready to be displayed for the holiday season, candles in wine glasses containing cocktail recipes, and a clan of gnomes. ECM was fortunate enough to hear about Kristi’s candle making journey which began in the 1960’s.

“I was a hippie and that’s what I used to do back then, and then I got out of it for years and raised my children,” she explained. “I had a dance studio for 35 years in Ramona and I just sold it last year but I just found this picture from 1993. I was making candles back then with my kids. I was doing this back then and I totally forgot about it.”

Kristi established her dance school back in the 80’s in Ramona and she explained that it just grew. Her studio had up to 100 students and 20 instructors at one time and she finally retired last year. Kristi explained that candle making is a lot less stressful than running a dance studio. 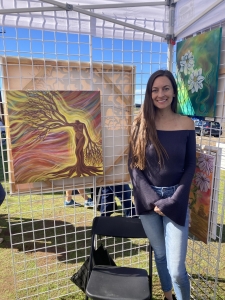 A painter who is a Ramona native featured her surrealist inspired painting at the festival. “As you call tell I am inspired by nature and I guess surrealism so I try to exaggerate the colors and the forms. I like to kind of show the connection and also the disconnection between nature and humans,” Brittany Balcom Sudak (photo, left) told ECM. She has been creating art ever since she was a little girl and now mostly works with acrylics, watercolors, and India ink. “I have a toddler at home so I don’t want to have the fumes around her,” she explained.

Sudak also had on display hand-painted pieces that shows that her work isn’t exclusively reserved for canvas. She had been a schoolteacher for many years and shared one of her experiences which led to another idea for her latest artistic pieces—painted vinyl records.

“My first art teaching job with my students we made a chandelier out of the records,” she said. “They were having a Christmas show so we decorated the records. When they were finished, the janitors threw them away so I took them out of the trash can and I was like,  `I want to paint these and save them.’ Then I started doing that more because I thought it was a fun idea.” Sudak explained that she likes to refurbish items for her art by using boxes from gifts, and prints that have been thrown away. 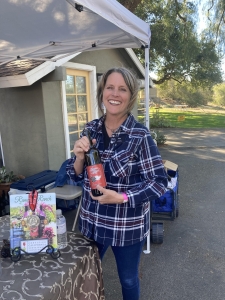 Many wine makers were featured alongside the local artists one of them being Ramona Ranch. Ramona Ranch is a certified sustainable winery that doesn’t use any pesticides on their grapes. Their philosophy and goal is to keep it safe for the environment and safe for us to drink. Kim (photo, right), who has been working for the winery since the pandemic began, spoke with ECM and shared some of her favorite wines. “I think wine is moody. If it’s a really hot day and I want something I’m going to go for a white. If I am having great steak, I’ll pull out a Tannat. If I’m having pasta it’s always going to be our Sangiovese. Depends on what you’re doing, what you’re in the mood for. We’ve got a tawny port that’s going be amazing for the holidays. I don’t have a favorite it just depends on what I’m doing.”

Kim explained that she got into the industry buy selling cheeses to local wineries. “COVID kind of killed my business. I love the Ramona Winery community; the people are amazing and they’re so supportive. I didn’t want lose touch with the people,” she recalled. So, she began pouring wines for Ramona Winery. 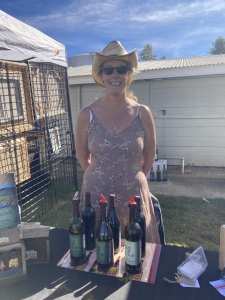 Just across the venue from Ramona Winery’s booth was Old Julian Vineyards, which was formed by a brother-sister duo back in 2019. They offered a selection of wines handcrafted for every palette. “We have a Bordeaux blend which is a blend of cab, cab franc, petite Bordeaux, we have our 2018 award winning Syrah, and we have our estate cab as well.  My favorite would be the blend the big barn red,” said Shelli (photo, left) who is the co-owner of the winery. She and her brother planted their first vine back in 2013 and bottled first in 2016.

Old Julian Vineyards is the only winery in Ramona that has a distilling license so they offer handcrafted brandy as well. The brandy is a relatively new product compared to their wines but seem to be a hot-selling item during the holiday season. Shelli explained, “It’s a different niche. I mean we are definitely known for our reds but like especially now with the holidays the brandy flies off the shelf for holiday gifts.” 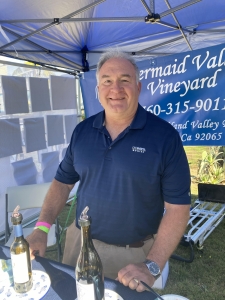 The neighboring vineyard located right next to Ramona Ranch, Mermaid Valley Vineyard, poured some of their award-wining wines for patrons to try. Scott Flinn (photo, right) explained that both he and his wife Kim were both in the Navy which led to their inspiration for their vineyard’s name. “She’s the mermaid,” Scott told ECM.

Mermaid Valley Vineyard’s notable Siren’s Song won the Home of 2022 San Diego County Wine of the Year award. Their Sauvignon Blanc had a rainbow of honey tones to it. “You look surprised,” Flinn said as a patron tried a sample. “I normally don’t drink white wines but I’m impressed,” responded the patron. Scott explained that due to the climate many wine makers make the mistake of trying to make Chardonnay and the grapes used for that type of wine doesn’t work with San Diego’s climate thus influencing one’s perception of white wines.

Around noon, just after lunch was served, the festival held its live auction drawing in many of the participants to the center of the venue. The live auctions featured wine barrel art pieces by several different artist including Marie Bravo, who created a wine barrel piece that also acts as a firepit table. Her barrel included her signature glow in the dark constellations and the glowing neon sunset found on the center of the barrel represents Ramona’s beautiful sunsets.

Marsha Cook’s wine barrel that also functions as a wine storge piece depicts images one would fine in a nature journal. The third barrel that was up for auction was by a woodworker named Jacob Cash. His barrel was transformed to a coffee table that also served as a storage case inside. The tabletop was from an antique oak dining table and the barrel itself rested upon pieces from an antique bookshelf. Bidders were placing bids on each barrel piece that ranged from 750 to 2,100.

The festival also held silent auctions featuring many artists including work by artist Lynette Bredow, who has been participating in Ramona’s Art and Wine festival for the past nine years. This year she had a watercolor painting which was inspired by Hatfield Creek’s new harvest of Petite Syrah grapes.

The Ramona Art and Wine festival’s proceeds directly benefit the Ramona H.E.A.R.T Mural Project. The Mural project’s mission is to encourage economic vitality by increasing tourism, promoting community pride, and celebrating Ramona’s rich cultural heritage through an outdoor visual arts program. The acronym H.E.A.R.T not only recognizes Ramona as San Diego’s geographic center but represents what the organization feels is the character of the community. The H is for historic and hiking, the E is for equine, A is for arts, antiques and agriculture, R is for rural vistas and the T is for tasting of wines.