Public comments will be heard at hearing; action comes after years of citizen complaints and recent media spotlight on polluter 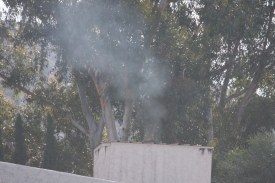 April 21, 2011 (El Cajon) – East County Magazine photographer Dennis Richard, disgusted by the sight of smoke belching from the Neptune Society crematorium at 13065 Old Highway 80 in El Cajon, sent a photo to media outlets that started a firestorm of controversy.

“You can see from my picture; the smoke of ...human bodies blowing out of the smoke stack and drifting over Jack in the Box and the nearby neighborhoods,” he wrote. 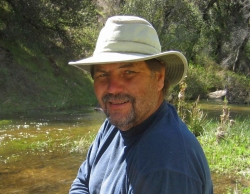 A records search conducted by East County Magazine reveals that more than 100 complaints were filed against the facility over many years by numerous neighbors. Yet despite hundreds of pages of documented complaints and supposed investigations by the County Air Pollution Control District (APCD), only one air quality emissions report was ever taken, according to the records provided by the County. That emissions report can be viewed here.

Why nothing was done for so many years remains in question. But after KUSI’s Turko Files aired a story on the facility including an interview with Richardson and other witnesses, with photos documenting the problem, Robert Kard, air pollution control officer at the APCD, took action. He informed Turko that the violation was the worst he’d seen in two decades on the job. Turko also aired images taken inside the facility, where a thick cloud of smoke left a stench on Kard’s clothing.

On March 9, Kard informed Richardson that notices of violation had been sent to Neptune. “These kinds of violations can cost thousands of dollars per day and escalate as the problems repeat,” he said. Kard has since concluded that Neptune has failed to correct the problems. “We are pursuing all legal action,” he has stated.

Now, the County APCD has filed a petition with the Air Pollution Control District Hearing Board requesting an abatement order be issued and that the crematory operating permit be revoked.

The hearing will be held at 9 a.m. on April 28 in Room 358 of the County Administration Center, 1600 Pacific Highway in San Diego. Public testimony will be accepted at the hearing.

I live near downtown El Cajon and often smell a thick, heavy, stinky wood-smoke odor at night, possibly from a BBQ place (on El Cajon Blvd.) doing overnight slow cooking, or??? I have reported this to city hall months ago and the problem continues to exist. I thought food establishments were required to have filters to reduce such issues. Maybe the ACPD should monitor the entire valley for violations, including homeowners with fireplaces. Does'nt the EPA or someone report smog and particulate levels to city officials who then should take action to reduce the pollution?

You may wish to do so, too.