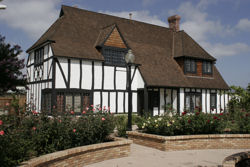 February 22, 2012 (Lemon Grove) -- The fabulous Cremer Family that lived in Lemon Grove's famous H. Lee House for half a century will return to the scene of their saga on Mar. 1 at 7 p.m. on the next "History Alive" lecture sponsored by the Lemon Grove Historical Society.

Four of the six children of George and Wilma Cremer will recount life among a menagerie of pets, toys, games and inventions that gave their picturesque, 1928 hilltop home its nickname, "Cremer Playland." Their barbecue was next to a prototype afterburner--the first ever invented--from an X-15 rocket.  The swimming pool was the scene of countless parties. The family room was also a hothouse.  The upstairs bedrooms were adorned with Wilma's favorite French toile wallpaper. George, a former champion MIT gymnast, used the massive crossbeam in the master suite for exercising. The stairwell banister and upstairs laundry chute were slides and jumping off points for six little Cremers (rhymes with "creamer").

George Cremer (1917-2008) was the brilliant MIT graduate, inventor and aerospace engineer, who was recruited in 1943 to work on the Manhattan Project (first atomic bomb) at Los Alamos Scientific Laboratory. He transferred to Fairchild Engine & Aircraft Corp. in Oak Ridge, TN, then spent 25 years at Solar Aircraft Company (today, Solar Turbines, http://mysolar.cat.com/) as the driving force in the company think tank. With colleagues he invented hardware that went to the moon and Mars on Saturn/Apollo spacecraft-- and visited Jupiter, Pluto and Saturn.
Wilma and George made many humanitarian trips to Tijuana with food and clothing for needy families, and George would also do household repairs. Together, the couple traced their heritage back to 17th century England and Western Europe. The former Easterners married while in college. Their surviving children reside in San Diego County.
CalTrans bought the H. Lee House in 1997 in order to remove it from the impending six-mile extension of Route 125.  Ultimately, the house was towed across the trolley tracks at Central Avenue in Lemon Grove on July 12, 2002 and taken to its new home in Civic Center Park. The park was completed in 2003. The Lemon Grove Historical Society is the covenantee for the house, a state historic site, and has restored the interior. The Society is responsible for maintaining and operating the house and grounds.
"We are over the moon with George's rockets that this charismatic family will be with us," said Pat Jones, vice president for programs in the Historical Society. "So many people recall visiting the house, which is a major landmark in town."
"History Alive" is free and suitable for ages 13 and over. Refreshments will follow the presentation.  For more information, call 619-460-4353.