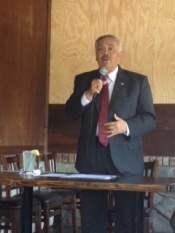 June 12, 2014 (El Cajon)- The East County Chamber of Commerce had its Rancho San Diego and Jamul Business Roundtable at Hooley’s in El Cajon on Thursday May 29. Jesse Navarro, director of community relations from District Attorney Bonnie Dumanis’ office, and two representatives from the Sheriff’s office spoke about issues businesses and residents have been facing. 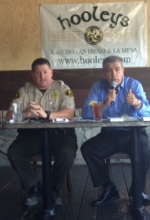 Navarro, a former Deputy Sheriff before joining the D.A.’s staff, spoke about what Dumanis’ office has been doing.  “We look at crimes,” he said, adding that around 80 to 90 percent of the crimes they look at comes from about 20% of the local law enforcement agencies. “We have the responsibility of choosing which cases we file, and which cases we don’t file. We review close to 40,000 cases a year mostly from law enforcement agencies. There seems to be a new fraud, a brand new scam, every week,” he observed.

Recently, San Diego County has gotten to be very popular for human trafficking, Navarro warned. “Mostly young women are brought here from all over the world. We get a lot more from Mexico. We are ranking incredibly high in the U.S. We have delegated a special unit that deals with human trafficking.” Other serious problems include drugs, child abuse and increasingly, elder abuse.

Navarro oversees presentations on embezzlement and workers’ comp insurance fraud. “A lot of the problem comes from employees,” he said, adding that the D.A.’s office addresses the rights, responsibilities and consequences of actions.

Through a check enforcement program, bad check writers are given 30 days to make good on the debts.  He added that the fastest growing crime is identity theft.

Jose Ortiz, crime prevention specialist, then spoke. “I’ve worked here for 18 years,” he stated. “The most common crime in East County right now is breaking into cars and it's not forceful, meaning people forget to lock their cars or windows.”

Sheriff Shane Burt said a few words on car and residential burglaries. “Most of the calls we deal with comes from residential areas.” He told the crowd, “Be a good witness. Video is outstanding with positive identification.”

A question and answer session then took place.

An older man who oversees apartment complexes mentioned he gets a lot of people coming to him claiming to be a resident’s caregiver. He wanted to know if he should ask if they really are who they say they are.

Navarro answered, “As a matter of protecting, you need to ask in a polite manner… There are some people that are licensed. Some are freelance.” Navarro also agreed when this man wanted to know if he should ask for references. He added, “If they refuse to provide you, take some action.”

Then a member of the Rancho San Diego Community Network asked Burt and Ortiz, “What means and methods do you use to communicate with the public?”

Ortiz said that residents’ information is obtained through Neighborhood Watch programs.  Sometimes, community public safety meetings are held jointly by local law enforcement and the D.A.’s office to “address the issues, listen to the people, and come up with an answer. If it’s a large group, we also invite the media.”

Someone else brought up the recent tragic shooting at UC Santa Barbara. He wanted to know if there was any way to train psychological officers for those kinds of cases.

Burt told him, “We do have PERT (Psychological Emergency Response Team)” in San Diego County.  But he added, “It’s kind of small right now.”  Navarro also mentioned they provide proactive training and preparation for law enforcement. Officer Bert Gines from Security First brought up that, “Crime does not have a face… No one reports the warning signs.” Reporting warning signs can help prevent such tragedies, he suggested.

An older lady spoke next. “I live in Campo. We don’t have too many people who are homeless. In El Cajon, I see a bunch of homeless people committing crimes. Once the Sheriff is called, they’re gone.” She asked how the Sheriff was handling this issue.

Sheriff S. Burt addressed the homeless issue in East County. “I really don’t have an answer. If you call us, we’ll respond.” Law enforcement will check on a homeless person’s background and past arrests.  But he made clear, “If they’re clean, there’s nothing much we can do… More or less, we let the individual go. We try to provide them with resources to get into shelters. But they’re full.”

Ortiz wanted to refer to the homeless as transients because he said, “They choose that lifestyle. We have problems with transients. We offer the Alpha Project,” he said, referring to a program that helps the chronic homeless with housing and other needs. But he added, “Some of them refuse. In Spring Valley, by the swap meet, we use trespassing letters and they get out.”

Chamber leader Eric Lund concluded with this advice, “Be aware of where the services are, so you can direct them. Or call the sheriff’s office.”

To learn more about the Chamber and other upcoming events, visit: http://eastcountychamber.org/. Or call (619) 440-6161. You can also visit  https://www.facebook.com/SanDiegoEastCountyChamber.