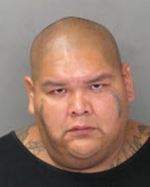 December 2, 2010 (San Diego’s East County) –The San Diego Regional Fugitive Task Force announced today that Michael Edward LaChappa, 33, has been arrested in Winterhaven, California, after Crimestoppers received tips that he was hiding on a Quechan Indian reservation there.

LaChappa was wanted on a $250,000 bail felony warrant for robbery, sexual battery and false imprisonment. According to authorities, he has an extensive criminal record that includes attempted murder, shooting at an inhabited dwelling and domestic violence.

LaChappa is a member of the Viejas tribe, said Sgt. Russ Moore with the San Diego Regional Fugitive Task Force.

"He has no association with Barona," said Bonnie LaChappa, community outreach representative for Barona.

Robert Scheid, spokesman for the Viejas band of the Kumeyaay nation, declined comment on LaChappa’s arrest.

Moore said Michael LaChappa has caused problems on the Viejas reservation in the past. “About two years ago, we tried to arrest him at Viejas and he barricaded himself into his house,” Moore said.” It took a SWAT team to get him out.”

The SWAT incident occurred after authorities attempted to serve a warrant on LaChappa for another offense. “We thought he was armed with a machine gun,” Moore recalled. After being released on bail, LaChappa was later found with the machine gun, Moore added.

While out on bail earlier this fall, LaChappa committed new offenses. “He went into a tattoo shop in El Cajon, threatened a young lady and licked her face, so there is also a sexual battery charge,” said Moore.

LaChappa, who weighs 380 pounds, was considered armed and dangerous. He had a rifle in his possession when apprehended. He has numerous tattoos, including feather tattoos on his face.

Depending on his arrival time, LaChappa may face a judge today in El Cajon before being booked into County Jail, said Moore.