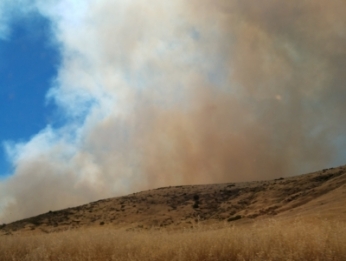 Photos by Cynthia Wharton, taken yesterday from Otay Lakes Road just before it was shut down.

May 21, 2017 – A criminal arson investigation has been launched into the cause of the Gate Fire, which has charred 2,056 acres and is now 70% contained.

Captain Isaac Sanchez with Cal Fire told ECM news partner 10 News that a video shot by a target shooter and posted on social media shows a group of people starting the fire. The video may be this one posted by a user named Vandalsworld on Instagram:  https://www.instagram.com/p/BUVtlvSBN0r/?hl=en.   The poster claims the people started the fire, but it is unclear whether the fire was started by shooting or some other way. After the fire started, the people could be seen walking away from the scene.

Earlier, some neighbors had blamed the fire on shooters at a target range near where the fire began, in an area where shooting is believed to have started several prior brush fires. But now a shooter may have captured evidence to catch possible arsonists or careless individuals whose actions ignited the Gate Fire.

Firefighters continue to make progress towards full containment, Cal Fire reports.  State Route 94 has been reopened, as well as Otay Lakes Road.  Please drive with caution, however, in this area. 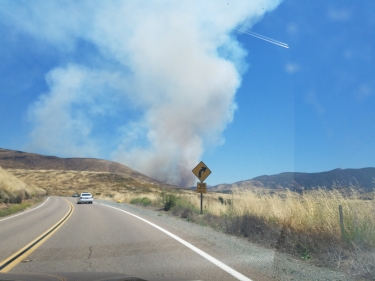 The fire began Saturday south of Jamul and has charred primarily brush along Otay Mountain.  A voluntary evacuation order was issued Saturday in Dulzura and a mandatory evacuation of the Thousand Trails campground on Otay Lakes Road was made, but no structures have been reported lost.

No firefighters were injured, but a Chula Vista policeman directing traffic was struck by a vehicle and hospitalized.

If you have an emergency, call 9-1-1.  Monitor local television and radio stations, or call the San Diego County Information line by calling 2-1-1 for updated information.

If you have details,an eyewitness account or photos on this event or any local emergency please contact editor@eastcountymagazine.org .