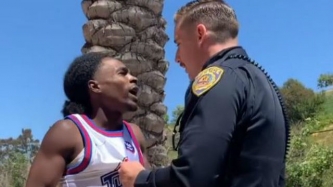 January 4, 2021 (La Mesa) -- San Diego County District Attorney Summer Stephan announced today that a criminal charge has been filed against a former La Mesa Police Officer in connection with an arrest of Amaurie Johnson, 23, near the Grossmont trolley station in La Mesa. The criminal complaint alleges that on May 28, 2020, Officer Matthew Dages, 30, filed a police report that contained false information.

The incident was shown in a video that went viral on social media, sparking racial justice protests. The Dages incident occurred three days after the killing of George Floyd by a white police officer in Minneapolis triggered nationwide protests and two days before a riot resulted in looting, vandalism and the burning down of three buildings in La Mesa.  The Johnson arrest has been likened to the fuse that ignited a powder keg of explosive rage over mistreatment of black suspects by white police officers.

Dages is accused of falsifying the reason for Johnson’s detention as well as his actions. Police body camera footage failed to back up Dages’ claim that Johnson had assaulted the officer and instead showed Dages pushing Johnson into a seated position.

The former LMPD officer is charged with one felony count of filing a false report pursuant to Penal Code section 118.1. If convicted, he faces up to three years in prison.

Dages had been employed as a La Mesa police officer since 2018, but was terminated due to this incident. The termination was recently upheld by the City of La Mesa Personnel Appeals Board after a hearing.

Johnson has filed a civil lawsuit against the city and Dages.

“When someone in a position of trust such as a police officer commits a crime, it causes tremendous harm and shakes the community’s confidence in those who are sworn to protect them. Everyone is accountable under the law and as we’ve done previously, we will file criminal charges when they are supported by facts and evidence. My office’s Special Operations division of specialized prosecutors and investigators is dedicated to the principles of conducting fair, thorough and independent reviews of public corruption and police misconduct cases with the goal of enhancing public trust and pursuing justice.”

ECM has sent a message to Johnson seeking comment, but he has not yet responded.

Dages is expected to be arraigned on March 9 at 1:30 p.m. The hearing will be held remotely due to COVID-19 precautions in East County.

“Dages had been employed as a La Mesa police officer since 2018...”. He is 30 years old. What was his background/employment before joining LMPD? Could LMPD have avoided hiring an unfit individual? “Defund the Police” is probably the worst misnomer ever contrived, and the lack of fitness for many officers is because the entire nature of policing has metastasized. It is only reasonable to move funding from police departments to agencies whose missions are aligned with the problems. We now expect our police officers to do mental health intervention, deal with growing homeless populations, address drug/alcohol addiction and handle a myriad of social issues. This is not what most officers signed up for, but it has been much easier to funnel funds to police agencies than to community organizations. When some idiot called for “Defunding the Police,” we probably lost the battle for effective social interventions for some time to come. And we get officers like Dages who are wholly unsuited for defusing and de escalating social tensions.
That nobody is above the law matters, it is good to see the DA doing her job. I am not a #defundthepolice supporter except to the degree that it is understood as a necessary threat to get their attention. I could get behind reducing the profession's numbers and using those funds for trained mental health officers and social services. We need our police for all kinds of reasons, including hate crimes, environmental crimes, domestic abuse, and violent crimes including rape. But I want to see professional, well trained, honest public servants. This one deserves to loose the badge and never get it back. Accountability is good. #blacklivesmatter