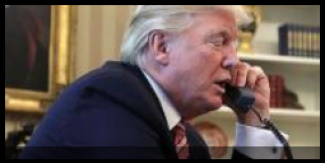 He also taunted Raffensperger, claiming voters don’t want to turn out in Tuesday’s special election for two seats that will determine the balance of power in the Senate.  “They don’t want to vote,” he said. They hate the Governor and they hate the secretary of State.”

The bullying tone of the call was reminiscent of Trump’s call to Ukranian President Volodymyr Zelensky. Trump withheld military aid authorized by Congress for the Ukraine, then urged Zelensky to launch a phony investigation into Hunter Biden as a condition of receiving the money. That call led to the impeachment of Trump by the House, though the Republican-held Senate acquitted the President without calling many key witnesses.

The Washington Post and New York Times cite numerous legal scholars who have descried Trump’s comments to Raffensperger as an abuse of power and potentially criminal actions.

The tape was reportedly made by Raffensperger and released hours after Trump sent out a tweet mischaracterizing the conversation and slandering Raffensberger.

Today David Worley, a member of the Georgia State Elections Board sent a letter to Raffensperger calling on the Secretary of State calling for investigation.

“To say that I am troubled by President Trump’s attempt to manipulate the votes of Georgians would be an understatement.  I commend you and Ryan German for sticking to the state’s position and the plain facts despite the Resident’s repeated attempts to pressure you into somehow changing the certified votes. It appears that you did so even in the face of threatened criminal action,” the letter states.

The letter from the senior elections boar member asks Raffensperger to open an investigation into the January 2 phonecall with the President and others “to determine whether violations of the provisions of the Official Code of Georgia Annotated which prohibit solicitation to commit election fraud have occurred.” He added that once an investigative report it received, the Board will determine whether there is probable cause to refer to the District Attorney or Attorney General for prosecution or civil remedies.

State crimes cannot be pardoned by a President.

Ryan Locke, a criminal attorney and former pubic defender in Atlanta, GA told the New York Times that Trump could also be in violation of laws prohibiting extortion. “The recording alone is certainly enough to launch an investigation. It’s likelyprobable cause to issue an indictment,” Locke said.

Carl Bernstein, one-half of the Woodward and Bernstein reporting team at the Washington Post that exposed the Watergate scandal ending in President Richard Nixon's resignation, called the Trump tape worse than Watergate in an interview on CNN and called on Trump to resign. Nixon's downfall was ultimately precipiated by a phonecall caught on tape with administration officials, in which Nixon admitted to conspiring to coverup a breakin by Republican operatives at the Democratic Party's headquarters. Bernstein called Trump's call a "smoking gun."

After a Trump tirade alleging a `ballots under table scam ballot destruction, out of state voters, dead voters, and more” Raffensperger fired back, “Respectfully, President Trump, what you’re saying is not true. The truth will come out.”

Trump’s campaign filed numerous challenges to election outcomes in several swing states. Every court decision was dismissed or found to have no evidence of any fraud – including decisions by judges appointed by Republicans and even the Supreme Court, which has multiple justices appointed by Trump.

While some Republicans in Congress have threatened to challenge Biden’s victory on Wednesday, when Congress is set to certify the Electoral College’s results in favor of Biden, such a challenge cannot result in Trump remaining in power. Even if Congress failed to certify the election by January20th, when Trump’s term of office ends, the Constitution specifies that the presidency would then pass to the Speaker of the House, Nancy Pelosi, a Democrat.

Trump, desperate to hold onto power, has even suggested that the military should be used to prevent Joe Biden from taking office on January 20th,prompting ten former secretaries of defense, both Republicans and Democrats, to publish an op-ed in the Washington Post stating clearly that Biden won and that “the military should not be used in any way to alter the outcome of the election.”