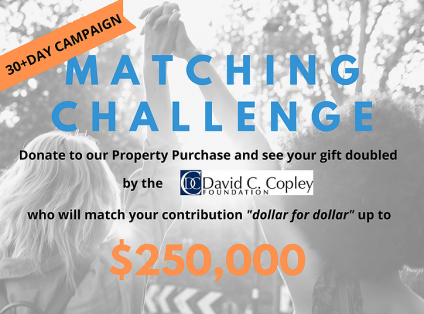 September 19, 2020 (El Cajon) - The Crisis House is urgently fundraising in its biggest campaign ever so that it can purchase a new building before the City of El Cajon ends Crisis House’s lease and forces it to move out by December 31, 2020.

The David C. Copley Foundation has pledged a challenge grant where the foundation will match dollar for dollar raised up to $250,000 toward the purchase of a new building and moving costs. The Crisis House began a fundraising campaign to have that $250,000 in the next 30-60 days.

“We don't have the money we need to purchase a building,” said Mary Case, Executive Director of Crisis House.

Crisis House is raising the funds to purchase a building while actively looking for new locations and making an offer on a building soon.

“There was no time to do a campaign, let's say a year ago, and get us in a place where we need to be where this would have gone a lot smoother. We do need the financial support to make this come together,” Case said.

For the past 26 years, the Crisis House has provided wraparound services and emergency, transitional and permanent housing from its building in El Cajon. Many of the people seeking services at Crisis House are survivors of domestic violence or homeless.

After El Cajon decided in June to end the lease so it could sell the building, the city agreed to give the organization $700,000 for the early termination of the lease, which will not cover the entire cost of relocating. If the full matching funds are met, Executive Director Mary Case hopes the organization will be able to purchase a new building without needing a mortgage.

The organization plans to stay in East County, although not necessarily in El Cajon specifically.

Case said the organization has never done a fundraising campaign like this one because much of its funding comes from the government, foundations, churches and individuals.

Currently, Crisis House has a drop-in resource center with mail services for people without a permanent address and provides hot meals to homeless people. Both of those could be cut when Crisis House moves. Those services also require a conditional use permit.

“That will leave a gap. I don't want to focus on that, however, because I think that is just something that needs to be addressed maybe through the East County Homeless Task Force,” Case said.

Case hopes later the organization could receive a contract to operate a day center at a second location where those services could be brought back. That would also mean the main location could remain somewhat confidential for survivors of domestic abuse seeking help.

The Copley Foundation will match donations made through the end of 2020, but Case hopes to finish fundraising in the next month or two so that they can close on a property.

“It's so nice to be able to give $1, and have…everything get doubled. It’s just so nice for the Copley Foundation to do this,” Case said. “I feel like most of [it] needs to be raised before the end of October.”

Donations can be made at crisishouse.org.