“Facebook doesn’t create relationships. When I was younger, I remember posting something on Facebook, a bad word. My uncle called me and told me it was dumb. If you have a million followers or a lot of friends, those are not your friends honestly.”- a 22-year-old girl

STAAND is a part of Communities Against Substance Abuse. The group has this forum because adjusting to high school can be challenging for all students, but East County has experienced a huge influx of immigrant families and up to 50 languages are spoken among families in local school districts. More of these families live in poverty than ever before. This affects teens greatly.

Attitudes and behaviors reflecting marijuana are the same.  Among 11th graders, 70% believe marijuana is easy to get, 48% believe that using marijuana frequently (almost every day) is harmless, and 25% intend to get moderately or very high.

By 11th grade, when using alcohol or drugs, 14% teens report passing out or forgetting what happened, 10% report emotional or mental health problems, 9% had trouble or problems with police, 6% had unwanted or unprotected sex, and 15% reported having one or more of these problems.

Dana Stevens, executive director of CASA, welcomes everyone. Chrestina Jalil, a junior at El Capitan High and a STAAND intern, was the moderator for the event. She mentioned there would be drawings at the end of the forum and said a thank you to the sponsors, which include Grossmont Healthcare District, Grossmont Union High School District, El Cajon Police, the SETH Foundation, Yellow Ribbon Campaign, San Diego County Friday Night Live Partnership, CASA, and STAAND.

Jalil first introduced police chief Redman. “These topics are important to me. We’re proud to host this facility. I’ll be up with the panel to answer questions, and welcome.”

Next, Jalil introduced GUHSD Assistant Superintendent Theresa Kemper, who made a formal welcome. “You look at the issues of the forum and think ‘what could I do?” she observed. “You could do a lot. Think about your everyday life in school. Who do you know? Do you have kind words you could tell people every day? Each one of you can make a difference.”

Then Jalil introduced Sergeant Leo Castillo with Specialist Carolina Montero from the California National Guard, who had the audience try out the clickers on practice questions to get the audience’s opinions and compare them to what teens actually answered.  Answers listed are what teens answered, not what the audience answered. Some of those questions were:

4) Do you think teens experience cyber bullying? Among teens surveyed, 75% said never and 15% said more than one time.

Unfortunately, technical difficulties occurred at the beginning, so the STAAND interns introduced the panelists to pass time.

Stacie Francis, a junior at Santana High, introduced Police Chief Redman, who has been with the department for 25 years. “He is a member of the El Cajon Brewery club.”

Maricruz Resendiz, a senior at Mt Miguel High, introduced Muffat. “He has been working with the youth for the past 14 years.”

Courtney Lobel, a junior at Santana High, introduced Carter, a home visiting public health nurse, who continues to advocate for health at the community level for the past six years.

Zack Watkins from Steele Canyon High introduced Collins, who has been “in the suicide prevention for 14 years. He is currently a consultant.”

Blerina Sahiti, a senior at Mt Miguel High, introduced Coover. “He taught elementary for five years and was principal for a few schools.”

Thankfully, the technical difficulties were fixed and the audience finished up answering the survey.

One woman wanted to know what to do when you come across a suicidal teen. Collins told her the San Diego County Hotline Access and Crisis number. “The important thing is to listen. Ask questions, follow up with ‘do you have a plan?’ Give them resources.”

Sunshine Horton wanted to know why teens commit suicide. Collins mentioned, “There’s evidence suicide is going down.” Then he answered, [Because of] relationship issues, family issues, bullying. Suicide isn’t just a problem with the youth. You should educate people about treatment for depression. Counseling is the number one thing you should be doing.”

The first video that the STAAND interns showed was Sahiti showing up to a party with a bruise in her eye and she was self conscious about it.

After the video was done, Carter mentioned, “We’re looking at the effects of alcohol and the need and desire to maintain control over someone.”

A woman asked what to do. Carter told her to report it at school, call the National Domestic Hotline, or San Diego County Hotline.

Next, she asked, “What about bullying at school?” Coover told her, “There’s a wide variety of bullying. One of the things that is the biggest prevention comes from having students empowered to talk about it with adults. We have a responsibility for safety on campus.” She also questioned, “What point does the school take more aggressive action?”

Collins said, “Be an advocate for your child. Don’t take no for an answer.”

Coover said, “All of the campuses have law enforcement present. When it gets aggressive and the law has been broken, an officer gets involved.” This woman would later state, “I find it funny that the kids want their Facebook private, but it’s not.”

A dad spoke up and wanted to know how to deal with physical abuse.

One of the panelists answered, “Let your children know they deserve to be respected, and they deserve to be treated with equality. Mostly it’s women who are abused. The message to give the youth is that’s not ok, and telling them what a healthy relationship looks like, and what an unhealthy relationship looks like.” Coover suggested bringing in a professional, like “professional counseling or family counseling.” Muffat added, “Contact the domestic violence hotline. Counseling is where you should start.”

When someone else wanted to know the signs and symptoms of suicide, Collins said, “changes in eating and drinking. We have a suicide gatekeeper training.” When Stevens asked if this training could be offered in a language other than English, Collins told her it could, and that he’d be happy to train those foreign language speakers. 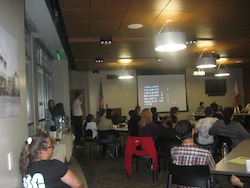 Another woman wanted to know more about alcohol and drugs. Coover said, “The schools are putting in a phase, where they are considering who’s living healthy lives and not experimenting with alcohol and drugs.” Muffat explained, “There’s multiple layers to this. What’s important is the awareness piece.”

Chief Redman added, “We take a zero tolerance policy for kids who get drugs. They get arrested. The police department does the best we can.”

There was one video about bullying, where a couple of girls are laughing at Jalil while she’s getting a drink and then she sees on Facebook later on that she’s being picked on because of her English skills.

Another video addresses cyber dating, where Lobel is telling Francis she wants to meet this guy in person that she met on Facebook, a ’25 year old doctor’, and she adds how she loves him only after a month of knowing him. Francis seemed hesitant. And it’s just a boy on the other end, pretending to be the doctor. So the point of the second video was that you don’t really know who’s on the other end.

Muffat addressed cyber bullying. “Unfortunately, there’s a recent survey that it’s not just teens in cyber bullying. It’s cultural. There’s the idea of free speech and harassment. Save the evidence. Right now, Instagram is the most popular on Facebook. Instagram is owned by Facebook. The one good thing about cyber evidence is if you can save it. Saving evidence is the key to stop it. The most common thing online is a digital fight or digital drama. Parents, you should be watching what your kids are doing.”

A woman, who works with GUHSD, spoke up. “In my house, there is no privacy. Social media is opening a whole category of opportunity. First, let’s educate them about social media. Education starts in my house at home.”

Muffat told her, “You have to take responsibility. There’s a knowledge gap between what the youth know and what people are preyed upon know. You have to think about what you’re posting. I agree it starts in the home. You need to start with saving basic information, knowing which questions to ask.” Muffat also wanted to get the teens’ perspective. “What’s going on with you guys?”

Lobel spoke up and said she doesn’t want her parents checking her phone because she’s uncomfortable with it. Other interns offered their opinion too.

Muffat added, “I’ve heard teens say ‘I wish my parents wouldn’t take away my phone at night.’ My favorite excuse is that it’s their alarm clock.”

Collin mentioned, “The stakes are higher now. We have to take certain precautions.”

Muffat advised, “In Facebook settings, go to general settings in your account. You can download all your data to your computer. Look at it. Does it depict you as a real person?”

Collins had one last message for the youth. “Trust your instincts and act when you need to.”

Amber, a psychotherapist in GUHSD, spoke up. “Every school has a therapist. If your son or daughter is struggling to do well academically and has mental health issues, the school can provide mental health services and it’s free.”

Horton then added, “I belong to a lot of organizations and I get bullied. Sometimes, I’m hurt and I don’t say nothing. Just be sensitive to the person.”

One student also had one last thing to say. “Facebook doesn’t create relationships. I’m 22 now. When I was younger, I remember posting something on Facebook, a bad word. My uncle called and told me it was dumb. If you have a million followers or a lot of friends, those are not your friends honestly. Your real friends post ‘Happy Birthday’, they take a minute to call you or go to your house.”

The panelists then got to share their final thoughts.

Chief Redman said, “Thank you all parents for taking the time to come to this. If you didn’t bring your child with you, take what you learned with you and teach it to your child.”

Muffat passed it on to Carter saying, “I’ve said enough.”

Carter told the audience, “Thank you so much for being here. [We should] be kind to each other, step up, and be aware. Make that our norm. We need to be careful of how you speak [to victims]. Lend a ear.”

Stevens said a heartfelt thank you as well, passing out evaluations and encouraging the audience to fill it out, so they can better improve for next year. There were also door prizes.

For more information on CASA and STAAND, go to: http://www.drugfreesandiego.org.