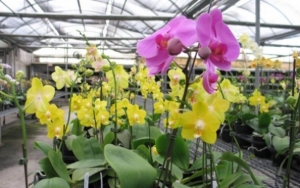 October 8, 2015 (San Diego)--Agriculture continues to be an economic heavyweight in San Diego County, totaling nearly $1.82 billion in value. Trendy crops — like grapes for the region’s budding wine industry — continue to rise. Specialty crops like cacti and succulents have blossomed in spite of, or maybe even because of, the ongoing drought.

At the same time, the total value of San Diego county’s agricultural production decreased for the first time since 2009 — from $1.85 billion to just under $1.82 billion — and just the third time since 1996. And the total number of acres in production dropped by 12.1 percent, the largest decrease in 18 years.

Those are just a few of the statistical stories found in the annual Crop Report released this week by the San Diego County Department of Agriculture, Weights and Measures.

The report, which covers 2014, is a yearly snapshot of an industry that has been squeezed over the years by freezes, fires, pests, diseases and most recently, a historic drought, but also one that has not only survived, but generally continued to grow.

County Board of Supervisors Chairman Bill Horn, who also grows avocados and citrus on his Valley Center ranch, said the Board has consistently recognized the importance of agriculture in the county and moved to boost it.

Eric Larson, executive director of the San Diego County Farm Bureau, said there was even a bright side to the 1.77 percent decrease in total agricultural value, coming after four straight years of increase.

“The slight drop in production value comes as no surprise in light of the challenges faced by farmers from the drought and the rising cost of water,” Larson said. “In fact, the change is small enough to be seen as a testament to the resolve of farmers to overcome the water issues.”

San Diego County Agricultural Commissioner Ha Dang said that resolve blended well with the County Board of Supervisors’ commitment to agriculture both as an industry and a way of life.

“Our growers continue to find effective ways to address challenges like the drought and invasive pests,” Dang said. “And the Board of Supervisors continues to support them, promoting and encouraging agriculture. That combined effort contributes to the sustainability of San Diego County’s thriving agricultural community and environment.”

The Crop Report, which can be seen online, stated that each of the top three crops — ornamental trees and shrubs; indoor flowering and foliage plants; and bedding plants, color and herbaceous perennials — increased in value in 2014.

The fourth most valuable crop, avocados, which has been greatly affected by drought and water prices, dropped 22 percent in value.

Among other highlights from the report: