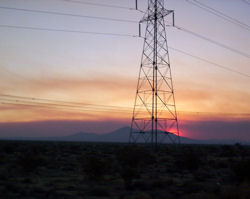 By Miriam Raftery
June 10, 2012 (San Diego) – The San Diego Planning Commission on Friday approved the Energia Sierra Juarez Gen-Tie project, a power line that Sempra Energy plans to utilize to bring energy from a planned Mexico wind facility across the border to the U.S. That facility’s future is in limbo, however, since a Mexican court has agreed to hear a lawsuit challenging Energia Sierra Juarez.
Donna Tisdale, Boulevard Planning Group Chair, opposed the line. She argued that the California Environmental Quality Act requires broader consideration of the entire project. The Energia Sierra Juarez wind project would encompass over 600 square miles, including lands abutting several wilderness areas in the United States. The lines, capable of carrying up to 1250 MW, will hook into the Eco-Substation in East County—all part of what developers are calling an “energy mega-region” here.
“This is just the beginning,” Tisdale said.
She  told commissioners that Sempra Energy is seeking to export natural gas while importing wind energy, profiting off the transmission both ways.  “It’s a big shell game,” she said.
She also cited a “culture of corruption” at the California Public Utilities Commission that has led to approval of dubious projects pushed forward by energy companies, including “pay to play” allegations against Commissioner Timothy Simon. Tisdale urged the San Diego planners to “exert your independence and moral authority to reject this project” and asked them “don’t certify any documents.”
Bill Powers with Powers Engineering said it is “unprecedented” for the U.S. government to give Sempra a license to become a “gatekeeper” for power produced by private industry in another country. “The entire operation is in a foreign country. We have no regulatory control,” he observed. “You don’t give gatekeeper authority to anyone –this is all of Baja. “
Powers said that for the cost of buying wind energy from Mexico at 11 cents a kilowatt hour, “for that price you can be putting solar on closed landfills in San Diego.”
Jeff Priolo from the Manzanita band of Kumeyaay Indians said the tribe believes there are cremation sites in the area but has not had adequate time to get monitors to the site to assess cultural resources. “We are a small underprivileged tribe and we have been overwhelmed with all the documents for so many projects,” he said.
The tribal spokesman revealed that the Manzanita Indians have been accepted into a health impact study by California State San Marcos that will be completed within six months. Tribal members have alleged health problems caused by wind turbines on the nearby Campo reservation.
“We are in favor of renewable energy,” Priolo said, “but we’re not sure how green this is.”
Denis Traficante, president of the Protect Our Communities Foundation, said the Foundation has spent over a million dollars fighting large energy projects in East County, including Sunrise Powerlink. “It’s been a proverbial s***-storm of projects,” he said, expressing empathy for Native Americans whose ancestors graves have been desecrated at some sites. He asked planners to slow the process down while the lawsuit works its way through the Mexican court.
A representative from the San Diego chapter of the International Brotherhood of Electrical Workers union opposed the project. “We could lose 1,500 jobs to Mexicio,” he said.
Joan Heredia with Enel  Green Power North America testified in favor of the project. She presented a news article headlined “Scientists warn that earth may be approaching a tipping point.” She argued that global warming concerns are compelling and wind projects are needed.
Heredia failed to disclose to commissioners, however, that she formerly worked for Sempra and has done permitting work on Energia Sierra Juarez, formerly known as Baja Wind: http://www.copswiki.org/Common/M631
http://energy.gov/sites/prod/files/oeprod/DocumentsandMedia/Sempra_Application_(PP-334).pdf
http://www.linkedin.com/pub/joan-heredia/12/724/9b
Michael Nagy with the San Diego Regional Chamber of Commerce spoke in favor of the project, calling it a “vital component for the San Diego-Baja economic development as a mega region.”
The San Diego Taxpayers Association also voiced support. Its board of directors includes representatives from Sempra and SDG&E, as well as Commissioner Adam Day:  http://www.sdcta.org/About/Directors.asp
Commissioner Adam Day said the commission needed to look at the isolated case of just the line in question.  He voted in favor of the project.
Commissioner Michael Beck voiced qualms, and abstained. “Sierra Juarez will be a hugely ecologically impactful project,” he said, citing concerns over a biodiversity crash. “What disturbs me is the lack of balance in these big projects…I do not have the big picture in East County.”
Commissioner Woods  voiced concerns, but voted for the line. “Are we opening a can of worms for the backcountry?” He asked staff to bring back information on all the energy projects proposed.
Chairman Pallinger voted for the line, noting, “This one is fairly limited,” but then suggested a need for an independent consultant to advise commissioners on the larger projects.
Commissioner Peder Norby voiced support for the line, noting that the line can carry more than wind.  He observed that in Europe, a hemisphere-wide grid enables use of geothermal energy from Iceland, wind energy from the United Kingdom and solar from Africa.

“We need to start working together internationally,” he concluded.