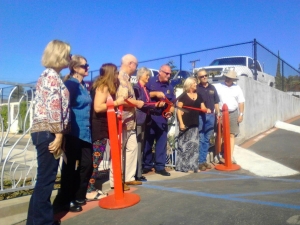 October 24, 2015 (Lakeside) - - An overflow crowd was on hand to witness the dedication ceremony for the newly completed Cedar Fire Historic Monument on Saturday October 14th at the Lakeside Fire District headquarters.  The monument includes a pocket park and honors first responders, those lost in the fire, as well as the strength and resilience of the survivors. 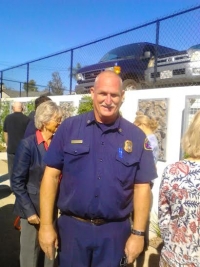 In attendance were Supervisor Dianne Jacob, Fire Chief Andy Parr, along with the Lakeside Fire District’s Board of Directors, the Cedar Fire monument committee, contractors, donors, and sponsors who dedicated time, equipment, supplies and labor to build the park.

The Cedar Fire burned 280,278 acres, destroyed 2,232 homes and killed 15 people including one firefighter before being contained on November 3. 2003.  It still ranks as the largest and deadliest wildfire in California history.

County Supervisor Diane Jacob spoke eloquently of the Cedar Fire as the “moment in time when everything changed.”  “This monument has been designed as a place to inspire people to reflect, reconnect, and remember Lakeside’s struggle and rebirth after the Cedar Fire.”

“Everything changed the moment the fire went into the city of San Diego,” she reflecting, adding, “since then $320 million have gone into fire prevention and protection.”  Just then the sound of sirens and fire trucks leaving the station interrupted her speech. 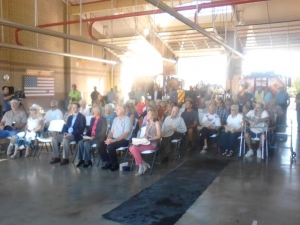 She continued, “We have learned lessons, we have come together, we have improved our preparedness, our awareness and shortened our response time…This living memorial is a place to reflect, take stock and . . . never forget.”

Fire Chief Andy Parr told East County Magazine, “This place will mean different things to different visitors.  Firefighters will come to remember and honor their fallen brothers.  To victims of the fire who lost their homes, lost everything and more, this will be a special place. However people who are new to Lakeside or never heard of the Cedar Fire will visit this garden park,” Chief Parr added.  Elementary school children studying California history will visit this site.  We wanted this to be a place of learning, lessons learned and positive hope for a safer future ahead as we learn to adapt to living in grassland conditions. “

Chief Parr was quick to point that although the District donated the land and there was some funding set aside for just such a memorial, “It was the community that came together to fund, plan and build this as a lasting remembrance that is still growing and evolving.” 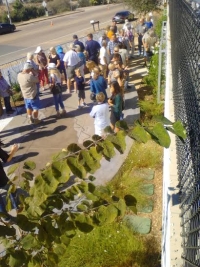 The walkway has inscribed the names and dates of past wildfires and on into the future.  The walls will be adorned with art made from remnants of the destruction.

Artists Jackie Hanson and David Thefeld with the help of the community of survivors created four wall mounted sculptures made from the remnants of the destruction.  David said “Some of these pieces of pottery or glass were all that remained of someone’s home.”