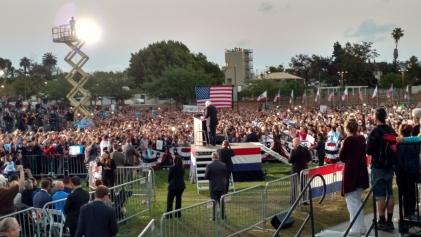 Speaking in National City, a community with high poverty rates, Sanders spoke of creating “an economy that works for all of us not just wealthy campaign contributors.”  He reiterated his goals of free college education, raising the minimum wage and launching a massive federal jobs program to put people back to work at “decent wages.”  He also called for criminal justice reforms and immigration reforms.

In addition he took direct aim at Donald Trump, the presumptive Republican nominee.

“I think virtually every Democrat understands that Donald Trump would be a disaster for this country if he becomes president,” Sanders told the crowd. “We cannot have a president who insults every other day, Mexicans, Latinos, who insults Muslims, who insults women, who insults African-Americans, who, in a sense, is doing everything he can do divide us up.”

After hearing stories of families who can only see their loved ones on weekends at Friendship Park, Sanders said, “All of this tells us why we need comprehensive immigration reform. I would hope that the Republicans in Congress understand that we have a very, very broken immigration system and that it must be reformed and that they should in fact work with Democrats to pass comprehensive immigration reform. If not and if I am elected president of the United States, I will use the executive powers that the president has to do that the best that I can.”

Sanders has previously called on the Obama administration to reassess its immigration enforcement initiative and extend Temporary Protected Status to families who have fled violence in Central America. He has introduced legislation that would eliminate quotas for the number of immigrants held in detention and ban private prisons, and cosponsored legislation to guarantee due process for border refugees.

By contrast, Trump has said he wants to deport undocumented immigrants and build a  wall along the entire U.S-Mexico border. Trump will be coming to San Diego May 27th for a rally at the convention center at 2 p.m.

Sanders was joined at the border by Christian Ramirez, director for the Southern Border Communities Coalition, and Maria Puga, widow of Anastasio Hernández Roja, who died of a heart attack after Border Patrol agents reportedly beat him and shot him repeatedly with a taser. 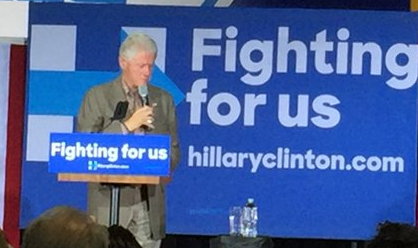 Clinton urged those present to support his wife, Hillary Clinton, and to have “confidence in the future of this country.”

“There’s only one person with a record of getting things done as first lady, as a senator, as secretary of state, with Republicans in Congress,” Clinton said, adding, ““And only one person who has a remote chance to both keep us safe in a dangerous world and make good things happen and give us the space we need to grow and lead the world out of this mess we’re in and all these crazy conflicts that are interfering with you living your future.”

The former President later headlined a fundraiser for his wife’s campaign in Rancho Santa Fe.

Come out and see Bernie this coming weekend! More info will be coming......

I have about 10 "he's coming" emails and none have details yet.

Ode to Hillary Go away Hillary, you've been here too long. We're tired of your lies, and your husbands schlong. You and Billy have been thieves in the night. And trying to take away our gun rights. Don't go away mad, just go away. We hope to never see you on another day. We're hope'n and pray'n for justice to be done. To watch you in prison, would be so much fun.