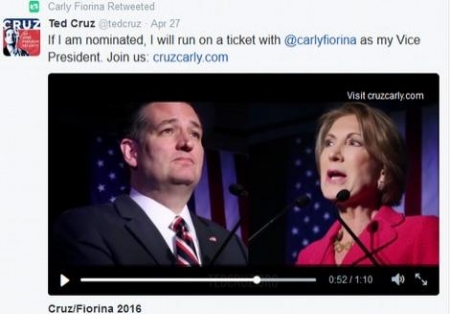 April 28, 2016 (San Diego) — The most unconventional presidential primary race in recent memory just got even more so.  Texas Senator Ted Cruz, one day after being mathematically eliminated from getting enough delegates to beat Donald Trump on the first ballot at the upcoming Republican convention, announced that if he wins the nomination, Carly Fiorina will be his running mate. Fiorina is the former Hewlett Packard CEO who previously ran for president and U.S. Senate in California.

Cruz praised her as an “extraordinary leader” and said their ticket is “about the future.”

Fiorina told the crowd in Indiana, which heads to the polls next, “I’ve had tough fights in my life,” adding that tough fights “don’t phase me one bit.”

The fight ahead looms tough indeed.  If Trump secures enough delegates to win on the first vote, barring an unprecedented rule change at the convention, Trump will be the Republican nominee.  If Cruz can block Trump from securing the magic number needed to win on the first ballot, however, delegates would be free on a second or subsequent ballot to vote for whichever candidate they choose—opening the door for a Cruz-Fiorina ticket to persuade delegates to shift allegiances from Trump.

The choice is odd in one respect.  California has the most delegates of any state yet to vote in the primary. But Senator Barbara Boxer beat Fiorina by a substantial margin in Fiorina’s failed Senate run.

Boxer issued a statement poking criticisms at her former rival. “I think that the most description of that team would be mean and meaner,” she said of the Cruz-Fiorina partnership.  “He wants to ship immigrants out of America, and she’s already shipped jobs out of America.  And they’re the perfect duo. Seriously, I would predict, actually, that this Fiorina merger will be just as successful as her last one at HP,” she added, referencing a troubled merger that led to Fiorina’s ouster at HP.  Boxer noted that after losing her California Senate race, Fiorina moved out of California.

Republican strategist Beth Miller, however, who served as an advisor to Fiorina in her 2010 Senate race, told the Sacramento Bee that Fiorina “connects well with people” and suggested she could add momentum to the Cruz campaign.

But former House Speaker John Boehner, a Republican who served in Congress with Cruz, issued the antithesis of an endorsement today.  During a visit to Stanford University, Boehner called Cruz “Lucifer in the flesh” and said he will not vote for Cruz if he wins the Republican nomination.