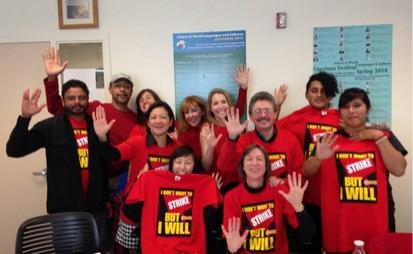 February 8, 2016 (San Diego) — The California Faculty Association’s union has voted to go on strike at California State University campuses starting in mid-April unless a 5 percent raise is approved.  In San Diego County, that would include professors, lecturers  coaches, counselors and librarians at San Diego State University and Cal State San Marcos.

CSU administrators have offered a 2 percent raise, but union leaders say that’s not enough, since members had not raises for five years, and raises of only 1.34% in 2013 and 1.6% in 2014, with no raise last year.

Administrators claim that a 5% raise would take money needed to increase enrollment, among other expenditures.

The union and administrators remain deadlocked since June on the pay raise issue.

The strike, if called, would cover five days: April 13 through 15th and April 18th and 19th. Other campus' unions have indicated a willingness to also walk out in solidarity if the faculty association goes on strike, the Sacramento Bee reports.

Do the research and see if you think they deserve a raise: http://transparentcalifornia.com/salaries/search/?q=professor These professors make pretty good money.