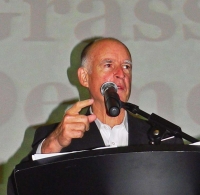 “The assumption is that you cannot find a qualified man or woman to lead the university unless paid twice that of the Chief Justice of the United States. I reject this notion. “—Governor Jerry Brown

July 13, 2011 (Sacramento) –California State University trustees yesterday voted to give incoming San Diego State University President Elliott Hirshman a salary of $400,000---$100,000 more than his predecessor, Stephen Weber, was paid. Trustees cast the vote despite a letter of objection from Governor Jerry Brown, who had urged the board to avoid paying an inflated salary.  The board ignored objections from Brown and students, also voting to hike tuitions.

Trustees voted 12-3, with Lt. Gov. Gavin Newsom, Margaret Fortune and Steve Glazer voting no. Hirshman, who began his new job this month, receives $400,000, of which $50,000 of it paid for with private funds from the university's foundation. Weber had been paid $299,435 a year at the end of his 14-year tenure.

Today trustees approved a 12 percent increase that comes on top of a 10 percent increase approved last year. Combined, the two increases bring undergraduate tuition at CSU's 23 campuses to $5,472 a year. That's an increase of about 23 percent compared with last year, and does not include campus-based fees that average $950 a year.

In the very same meeting, trustees voted to raise tuition 12 percent—on top of a 10 percent increase already approved last year. Together, the two hikes jack up tuition at CSU campuses to $5,472 a year – up close to 23% compared to last year. That doesn’t include other campus-based fees, which average about $950 annually.

The tuition increase comes in response to the state budget approved last month, which cuts state funding to CSU by $650 million, or about 24 percent from last year.

“At a time when the state is closing its courts, laying off public school teachers and shutting senior centers, it is not right to be raising the salaries of leaders who--of necessity--must demand sacrifice from everyone else,” Governor Brown wrote in a letter to Trustee Chairman Herbert Carter urging that the compensation plan be rejected.

Comments posted at the Daily Aztec, SDSU’s school newspaper, expressed outrage.
“Elliot Hirshman has already demonstrated his lack of leadership by accepting this salary. Real leaders (for example, Washington at Valley Forge) suffer with the troops (in this case, faculty and students),” Ernesto Gomez posted.

About 50 students marched and chanted outside the CSU trustees’ board meeting, carrying signs that read "Fund instruction, not corruption" and "No cuts, no fees."

"We are vehemently disappointed in what has happened today," said Gregory Washington, president of the California State Student Association, the North County Times reported. "The sad truth is that California isn't prioritizing its higher education."

The University of California's Board of Regents is scheduled to vote Thursday on raising tuition at its campuses statewide by 9.6 percent over an already approved 8 percent increase for the new academic year. Tuition for in-state undergraduates would increase $1,068 to $12,192, which doesn't include room, board or campus fees. One-third of the revenues from the fee hike, if approved, would be used for financial aid for UC students. Officials claim the tuition hike at UC is needed because of $650 million in spending cut to the UC system in the state’s new budget.