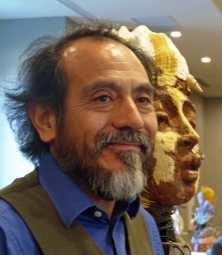 “It was the perfect storm,” Avilez (photo, left), a former fisherman, says of the life-altering event that inspired him to take up artwork as a career. Aboard a fishing vessel off his native Mexico battered by stormy seas, Avilez made a promise to pursue his passions if he survived the ordeal. His works reflect the materials of Baja beaches  and communities where he grew up – utilizing native clays, seashells, coral, wood and more. 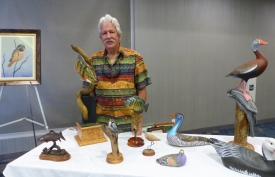 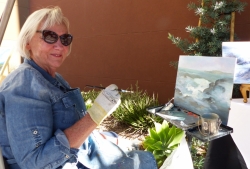 . Watch for an upcoming showing of his works in the Olaf Wieghorst Museum.

Some artists created plein air paintings live at the event, including Grace Schlesier (photo, right) of “Grace Your Walls” Studio. 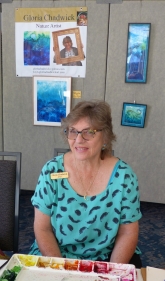 Many other artists displayed works in a variety of mediums, including Annette Cirillo (photo, right), whose works including many depictions of wine, martini glasses and other alcohol-inspired themes, since she comes from a family of bar owners.

Photographer C. Fodoreanu brought images shot at an old waterpark in Greece,  sepia tones evoking a vintage feeling in the series titled “Dancers” that captures both playful energy and what his website describes as “trustful play in 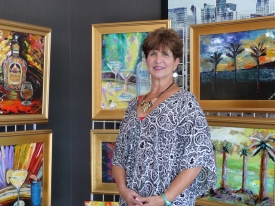 dangerous waters” that “seemed driven by a mysterious music and force.”

At East County Magazine’s booth, a half dozen authors displayed their works and signed books, including several authors from Sunbelt Publications and others. Some also gave talks during the event. Donald J. Harrison, author of several books on Jewish history in our region, shared entertaining tales about escapes from an early and poorly built San Diego jail. 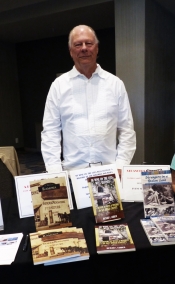 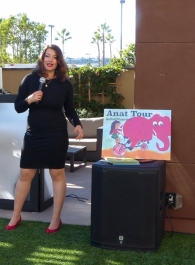 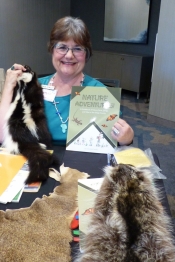 A talk by Carrico and appearance by author Amanda Matti were prevented by a rock band playing outdoors at nearby Creative Creatures Brewing, which drowned out the latter part of the expo and forced the expo to shut down two hours early.  Jazilla, a band at the Marriott’s event, had to move indoors to be heard due to the noise from the brewery’s band.

City Manager Graham Mitchell, asked by ECM about the noise problem, declined to provide a solution for the future. “As you know, both event happening at the same time were on private property.  The City cannot determine which private party should be allowed to have events and be in the business of coordinating private event calendars,” he wrote in a e-mail to ECM. (The Marriott has indicated it obtained a permit for its event, thus it is unclear why the city could not simply deny a permit for a competing noisy event and enforce noise regulations to avoid such unfortunate disruption of an otherwise excellent event.) 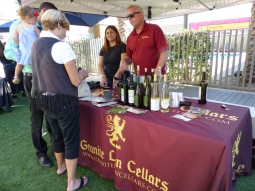 Fortunately, all who attended the Cultural Art Expo found an impressive array of arts, cultural and literary exhibits, displays, workshops and more.  Guests also had an opportunity to join a workout led by Anytime Fitness, enjoy lunch plus wine tasting courtesy of Granite Lion Cellars and tastes of local craft beers.

In addition to benefiting the nonprofit East County Arts Association, the event also honored the memory of local artist Nolan, who died at age 18, and supports the Don’t Give Up Movement, which strives to help struggling people find hope and prevent suicides. 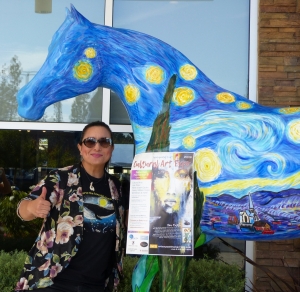 Linda Baltodano (photo, left), who organized the event for the Marriott,  praised the “dedication and hard work” of all who participated, adding that the Marriott’s owners were impressed with the professionalism of the event. She hopes to expand it in future years to encompass the broader arts community in El Cajon, which now includes the revitalized Magnolia performing arts center as well as several galleries.

In a letter to participants, she concludes, “I look forward to having you next year and making the Second Annual Art Expo another great success!”

Find more information on the event at https://artexpoatthemarriott.com