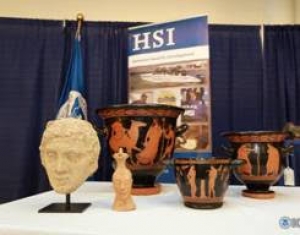 February 27, 2015 (San Diego)—Ancient treasures seized in seven U.S. cities, including San Diego, have been returned to the Italian government this week, Homeland Security has announced. 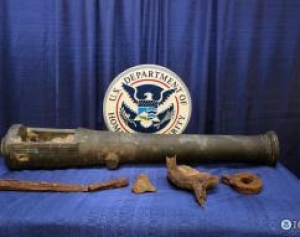 Homeland Security offices, working with U.S. Customs and Border Patrol, conducted the investigations and returned 19 artifacts including a 17th century cannon, 5th century Greek pottery and other items dating back as far as 460 B.C.

The artifacts were looted from their rightful Italian owners and smuggled into the United States during the last several years, according to Homeland Security.

In July 2012, Homeland Security in San Diego received information regarding four illegally excavated antiquities from clandestine sites in Pompeii owned by the Allen E. Paulson Trust.  Homeland Security officers found and seized three frescos, dating back to the first century A.D., and one askos, dating back to the 4th century B.C. The trust forfeited the items to the U.S. government so they could be returned to the Italian government.

“The cultural and symbolic worth of these Italian treasures far surpasses any monetary value to the Italians,” said Anthony Scandiffio, deputy special agent in charge of HSI New York. “HSI remains a committed partner in the effort to ensure that we investigate individuals involved in the illicit trade and objects like these are returned to their rightful owner.”

Since 2007, Homeland Security has helped to return more than 7,200 artifacts to 30 countries, including paintings from France, Germany, Poland and Austria; 15th to 18th century manuscripts from Italy and Peru; as well as cultural artifacts from China, Cambodia and Iraq.

Learn more about HSI cultural property, art and antiquities investigations. Members of the public who have information about suspected stolen cultural property are urged to call the toll-free HSI tip line at 1-866-DHS-2-ICE or to complete its online tip form.