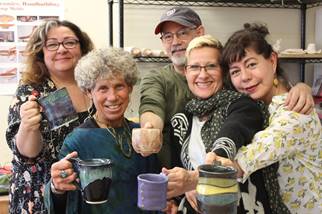 May 31, 2019 (La Mesa) -- A collective of La Mesa ceramic artists is using art as a means to raise funds and awareness for a local shelter serving immigrants and asylum-seekers. Cups for a Cause is a showcase of original artwork designed to benefit San Diego non-profit organizations, with the San Diego Rapid Response Network as the first organization to be in the spotlight.

The event takes place on Sunday, July 7th from 12 - 5 p.m. at Helix Brewing Company, 8101 Commercial St. in La Mesa. Hand-crafted cups and mugs will be the focus of the event, with 100% of mug sales being donated to SDRRN to provide vital assistance for migrant and asylum-seeking children and families.

IT STARTED WITH SUPPER 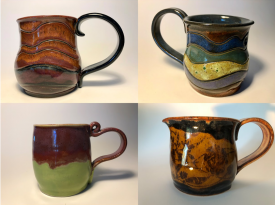 The artist collective began as an informal meeting of several artists looking to share space, which they found in La Mesa’s Commercial St. industrial district. As the artists spent more time together, they realized that they shared a similar passion for serving their community. They organized a potluck supper to get to know one another better, and an idea was born.

“As we gathered at our potluck we started discussing what we could do with our art that could serve others,“ says collective member Celine Krimston. “We wanted something local, something that we could see,” continues Linda Schubert, “and we felt passionately about helping refugee families. As we researched it we ran across information on the shelter, and one of us had a connection.”

From there, the group reached out to Jewish Family Service, the founding organization of the SDRRN, and developed a framework for the event. The artists decided to give 100% of mug/cup sales to the organization, which, says collective member Maria Flanders, was a liberating decision. “It’s great to not have any thought about money or sales for ourselves, because all of the money is going to a cause,” says Flanders.

The group also had a relationship at nearby Helix Brewing Company. Palmer has performed there as a musician and had attended other events at the brewery, and was able to secure the space.