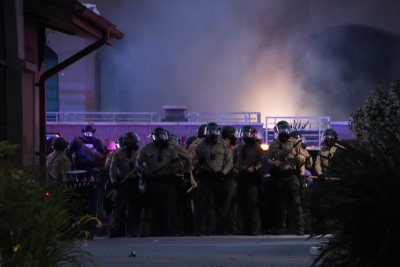 June 1, 2020 (San Diego) – Following civil unrest across the region, all East County cities and some unincorporated county areas are under curfew orders tonight. Curfew orders are as follows:

All residents are being urged to shelter at home – stay inside and off the streets. The sheriff’s department said violation of its curfew is a misdemeanor that comes with a fine of $1,000 or up to six months in jail.

The management of Parkway Plaza on social media has announced that it is ordering all tenants and customers to leave the major El Cajon shopping mall at 5:30 p.m.

The statement released by Parkway Plaza says, "Due to activity in the area and out of an abundance of caution, we required our tenants and team members to leave the property at 5:30 p.m. We'll monitor the situation and will share opening plans on our Facebook page. Thank you for your understanding and ongoing support."

In its bulletin, the City of Lemon Grove says, "The civil unrest and violent conditions recently witnessed in the County have created conditions of extreme peril for all residents of Lemon Grove, therefore you are encouraged to shelter in a safe environment for your safety."

Law enforcement agencies have indicated they support the right to protest, but are taking these steps to protect property owners threatened by vandalism, fires and looting that has occurred in many areas after protests against police violence including La Mesa in East County, where the damage included two banks and a historic building burned down by rioters.

The American Civil Liberties Union (ACLU) has objected to blanket curfews with no exemptions. The Sheriff’s department has provided exemptions for emergency responders, media, homeless people, those traveling to or from work, or fleeing a dangerous situation.

David Loy, legal director with ACLU in San Diego, states in a press release, "“Universal curfews are the wrong way to respond to disruptions in otherwise peaceful protests. Curfews that bar all presence in public are far broader than necessary and unjustifiably bar essential activities such as travel to and from work, seeking emergency medical care and fulfilling other caregiving responsibilities. Such curfews are especially inappropriate in cities that have not experienced any unlawful conduct.

“By making presence on public streets anywhere in a city unlawful, police are afforded too much discretion over whom to interrogate or arrest. This can lead to selective and biased enforcement, especially against Black people and other people of color; and it can invite harassment of people who are unhoused. Blanket curfews also undermine transparency and accountability by preventing the press from covering law enforcement’s response to public events." He adds, “Combined with troubling reports of aggressive force by law enforcement officers against protesters, blanket curfews repeat the problems that result in protests against abuse of police power.”

Check with your individual city’s website to learn if there are exemptions in your community.

While the City of La Mesa has not communicated an exemption to the curfew, El Cajon, Santee, and Lemon Grove have stated that exemptions from this order include all law enforcement, fire, medical personnel, and members of the news media. Additionally, individuals traveling directly to and from work, seeking emergency care, fleeing dangerous circumstances, or experiencing homelessness are also exempt within their municipalities.

In La Mesa, where citizens protected businesses Saturday night and saved some from looting and burning, some residents have  voiced concern on social media over whether curfews could prevent such actions. They voice fears over whether a curfew intended to make it easier for law enforcement to arrest rioters or looters could also leave businesses more vulnerable to damage if there are not enough officers to protect all areas.