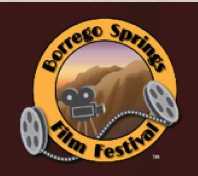 January 15, 2014 (Borrego Springs) -– With the help of Borrego Springs volunteers, a retired California State Park Ranger will watch his dream come true January 23 – 26 when the curtain goes up on the first Annual Borrego Springs Film Festival.

Fred Jee, a former ranger at the Anza Borrego State Park, started collecting historical data of movies shot in and around the little desert community early in his 34-year-career. “As it turned out, Borrego Springs’ involvement in the silver screen dates back nearly to the infancy of the film industry”, Jee explained. “It seemed only natural that someday the community should have its own festival to commemorate this association.”

We call it Fred’s dream,” said Borrego Springs Chamber of Commerce Executive Director, Linda Haddock. “The whole town has come together to make it a reality through fund raisers, private donations and lots of hard work. The festival has been in the planning stage for well over a year and we hope it will become an annual event that will help local businesses during the normal January lull in our tourist season.”

“Film entries for the festival have come from as far away as Nova Scotia, Serbia, and Great Britain and as close as our own backdoor,” according to Jee, Chairman of the Festival Committee. Two locally produced works, First People – Kumeyaay, a documentary, and a comedy, Three Dead Husbands, are among the 22 films on the billing.

“We are thrilled at the quality of the films selected and excited that many of the filmmakers plan to be on hand to represent their work,” Jee stated, adding that a full-schedule of events is planned for the four-day affair. It will all start with a gala Thursday evening, January 23, at the historic de Anza County Club where festival pass holders can rub elbows with the movie makers.

Screenings of the films will take place Friday and Saturday at the Borrego Springs Performing Arts Center where pass-holders can vote for their favorite entry, Jee said. As an added attraction four-wheel-drive tours are being offered during the weekend to remote desert locations where scenes from some of the more than sixty movies shot in the area were filmed.

Awards in the various categories and the coveted “People’s Choice Award”, all designed and prepared by local artists, will be presented Sunday afternoon at the newly re-opened and refurbished La Casa del Zorro. Also on tap for Sunday are free showings of movies produced by young filmmakers and the screening of Three Dead Husbands.

Information on film schedules and passes can be found at borregospringsfilmfestival.org or  by calling (760) 748-6770. Deluxe Festival Passes are $100 (films, parties, location tour). Festival Passes (films and parties) are $35 ($50 after January 22). Film Location Desert Tours are $75. Individual tickets are $6. Festival Passes may be purchased online and at the Borrego Springs Chamber of Commerce, 786 Palm Canyon Drive. Individual Tickets may be purchased online or at the theater box office ½ hour before each screening.

“We are urging people to purchase their tickets early as we have limited space in our theatre and for the desert tours,” according to Haddock, who added that the Chamber Office will be opened during the festival to assist moviegoers.