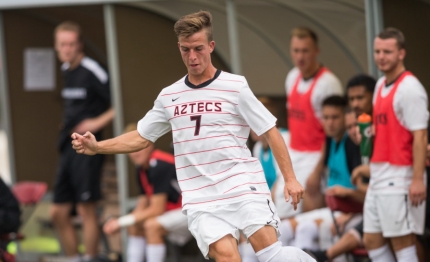 August 27, 2017 (West Point, N.Y.) - The San Diego State men’s soccer team earned its first win of the season thanks to a golden goal scored by redshirt senior Dallin Cutler in the 95th minute to break a 1-1 tie in the team’s first-ever meeting with Vermont. With the win, SDSU ends its east coast swing with a 1-1 record on the young season.

The Aztecs got off to a quick start, scoring an early 11th minute goal by Jeroen Meefout off a feed from Daniel Sagno to give SDSU a 1-0 advantage.

SDSU held that advantage for the following 57 minutes, but the Catamounts continued a steady offensive attack with Geo Alves cashing in on a corner kick opportunity in the 69th minute to even the score at 1-1. Five of SDSU’s second-half shots were on target, but the Aztecs could not convert in regulation and were forced into overtime for the second consecutive match.

After falling in the season opener against Army West Point on Friday night in overtime fashion, SDSU was able to flip the script on Sunday morning, with a pass from Thom Van den Berg opening up an opportunity for Cutler to rush down the right side and push his game-winning shot past Vermont goalkeeper Aron Runarsson. It was the only shot for either team in overtime.

In goal, Max Watkin earned his first collegiate win in his first collegiate game, playing all 94 minutes and collecting one save. Despite being outshot 14-10, the SDSU backline minimized the quality of Vermont’s shooting opportunities, with only two of UVM’s 14 shots being on target. The Aztecs also held an advantage in corner kicks at 6-5.

The Aztecs now have a week off in preparation for the team’s home opener against UC Santa Barbara on Monday, Sept. 4 at 7:00 p.m. at the SDSU Sports Deck.