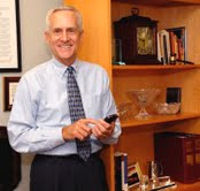 “Community college is still a great value for students looking to learn a new career and improve their lives,” said Zacovic, who began at Cuyamaca in July following a one-year post as executive vice president of instruction and student services at Victor Valley Community College in Victorville.

The community is invited to meet Cuyamaca’s new top executive at a reception to be held at 5:30-8 p.m. Sept. 28 at the Water Conservation Garden at Cuyamaca College. To RSVP, call (619) 644-7569 or email jennifer.danks@gcccd.edu.

A 26-year employee of California community colleges and an administrator at eight campuses and districts, Zacovic is familiar with the financial crisis that has hit education.

“Periods of fiscal difficulty force us to examine everything we do and consider expenditures and how they support the mission of the college,” he said.

“We must be able to help students realize personal educational goals, whether those be vocational training, a degree, university transfer, remedial education, or lifelong learning, without regard to the degree of preparation with which those students arrive at our college,” Zacovic said. “Championing an effective and useful system of student support services to facilitate the success of our students, particularly those with special needs, continues to be a priority for me.”

Having spent 20 years as a community college chief business official, Zacovic has been responsible for budgets of up to $380 million, so he’s comfortable scrutinizing spreadsheets and analyzing costs and benefits. Zacovic served as president of the board of directors of the Association for Chief Business Officials for California Community Colleges and was statewide recipient of the association’s 2006 Outstanding CBO Award.

Cindy L. Miles, chancellor of the Grossmont-Cuyamaca Community College District, said Zacovic’s skills as a consensus builder honed from years as a top-level administrator will be a major asset.

“During site visits to Victor Valley where we had the opportunity to talk to the campus community about Mark Zacovic’s leadership, he was universally praised for his ability to unite people to find common ground,” Miles said.

“At a time when state funding is shrinking but student needs continue to expand, Mark Zacovic’s expertise in budgeting and operations are critical,” Garrett said. “He is also someone who values innovation – he is open to new ideas and solutions. In today’s fast-changing world, flexibility and a willingness to consider new approaches are  key to good management.”

As Cuyamaca’s president, Zacovic expects to have a major role in fundraising and developing innovative partnerships within the community.

“In most of California’s community colleges, resource and economic development, and workforce training has taken on new meaning,” he said. “Over the next few years, Cuyamaca College’s position as a participant in these efforts will be paramount to growing community partnerships and providing local workforce stability.”

Zacovic, whose family moved to California in 1952 after the birth of his older brother, said his maternal and paternal grandparents emigrated from the Czech Republic to work the coal mines of southwestern Pennsylvania. He and his three siblings were the first in his family to go to college.

Born and raised in Whittier, Zacovic had aspired to become a second-grade teacher and went to the University of California, Santa Barbara, where he earned his bachelor’s in sociology. While working toward his master’s in business administration at Whittier College, he was employed as a substitute teacher.

Zacovic began working with children at a summer camp while in college and that developed into a full-time job when he graduated from UCSB. From 1977 to 1985, he supervised operations at children’s camps – one a traditional summer camp at Huntington Lake, Calif. and the second a summer computer camp with six U.S. and international sites.

After he left the camp job when the owner decided to switch gears and become a software developer, Zacovic applied for a job listed in the classifieds for director of administrative services at Santa Barbara City College. He got the job and also taught part-time in business administration for five years beginning in 1985.

He then served as the vice president of business services at Lake Tahoe Community College. During this time, he earned his doctorate in educational leadership with an emphasis in higher education at the University of Nevada, Reno.

“The insight and knowledge one gains from working as an interim is amazing,” he said. “The challenge is to be able to move into the organization quickly and determine within a few weeks where the organization needs the most help and then, as interim, define your role in helping the college solve some of its problems.”

Zacovic identified his top priorities as Cuyamaca’s CEO: bringing stability to the college’s leadership; supporting students and student programs, as well as faculty and staff, through difficult fiscal times; and helping develop a dynamic and realistic strategic plan to guide the college into the future.

Ever since his first visit to Cuyamaca as a member of the 2000 accreditation team, Zacovic said he has been enamored with the college.“The warm and caring people who work here, the pride that they take in their work to make the college a special place, the beautiful setting, the rich curriculum are all particularly alluring for me,” said Zacovic who, along with his wife, Anne, is in the process of moving  to the Singing Hills area of El Cajon.

Once an avid distance runner with five completed marathons under his belt, Zacovic these days prefers skiing and camping and generally enjoying the outdoors with his wife of 5 ½ years, who is the executive director of the Foundation at North Seattle Community College.

Asked about his biggest accomplishment as a community college administrator, Zacovic has an easy answer.

“Becoming the president of Cuyamaca College is a huge milestone for me and my career,” he said. “I can’t believe my good fortune to be a part of this college and to help champion the Cuyamaca Way.”

For more information about Cuyamaca and Grossmont colleges, go to www.gcccd.edu.