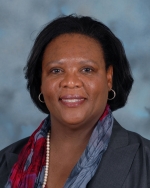 February 20, 2014 (El Cajon)– As an African-American college dean, Marsha Gable knew she was taking a risk focusing on the touchy topic of race in her doctoral dissertation in 2011.

But what resulted is a fascinating, intensely personal account of seven black women who managed to beat the odds to become CEOs in the state systems of public colleges and universities. The Cuyamaca College dean of counseling services since early 2013 gave a recent presentation, “Our Roots are Deep: Living Life from the Core,” as part of the campus’ commemoration of Black History Month.

Gable, who received a doctorate in education from San Diego State University, reached out to all 28 college leaders to participate in her study. She calls the group who participated the “Seven Wise Women,” who each agreed to interviews, field observations and journals chronicling their day-to-day activities.

The data Gable collected showed that while the women had their own unique paths to leadership, what they had in common were values-based leadership styles and specific strategies that helped them remain resilient while dealing with challenges based on their race and gender.

The women in the study had telling observations on the topic of race, pointing to the long-lasting sting of a racially untoward comment.

“It takes you by surprise, but it also digs into your reserve,” said one, noting that what could be described as “racial moments” are not moments at all. “It is something that lingers and it is cumulative.”

Another spoke about the pressure of constantly having to prove herself as a highly competent administrator.

“Old people say, you don’t go acting like a fool because then, people think all black people act like a fool,” she said, adding that she “didn’t have the luxury of being mediocre. Other African-American women are counting on me to have been successful.”

Gable noted in her study that negative perceptions and stereotyped images of African-American women ­­– as the “Mammy” portrayed as the nurturing and subservient caretaker, and as the “Sapphire,” characteristically abrupt, domineering, and loud – are also detrimental to their success as administrators in higher education.

Gable was the product of a working-class family in Toledo, Ohio, with a father who only got as far as the eighth grade and was a city bus driver. Putting her own schooling on hold to care for her children, Gable’s mother returned to the classroom in her 40s and became a special education teacher, a job she held until she retired at age 73.  Gable credits her parents for instilling the importance of education in her and four siblings, all of whom have college degrees.

Gable recounted the times she rode the bus with her father at the wheel, hearing the frequent racial slurs directed toward him.

“These comments were especially degrading because my father served this country as a sergeant in the United States Army during WWII, and of course experienced racism during his service,” she said. “My dad would say ‘I don’t know what’s wrong with those people, but whatever it is that’s not my issue, it’s theirs.’”

The challenges she has faced in her career as an African-American professional were the impetus for Gable’s dissertation, but never far from her consciousness is the underlying reason she got into education in the first place. Gable was initially failing college with little direction or personal insight in what she wanted to do. She said it took 15 years and returning to the classroom as a community college student to find her way.

Her academic rebirth is behind Gable’s commitment to ensuring the success of the less-privileged and at risk.

“I was an underdog, and know that when you have support and people give you a chance to shine, it is amazing what happens,” she said.

Gable has taken her study on the road, giving speeches and presentations at conferences and professional gatherings as a way to lend support to other African-American women in higher education.

“My plan now is to present my subject matter to a broader and larger group of professionals and to also begin writing articles for publishing,” she said.

And always keeping in mind the lessons learned from the Seven Wise Women:

Be proud of your background.

Know that you will leave a legacy.

Identify your foundational values and purpose.

The next event at Cuyamaca College commemorating Black History Month is the Tuesday, Feb. 25, 2014, step show performance by the SDSU chapters of Kappa Alpha Psi, Inc. fraternity and Sigma Gamma Rho Sorority, Inc., both predominantly black, Greek-letter campus organizations. The high-energy dance performances not only combine music and dance steps, but also integrate cultural history into the choreography. The show is set from 2-3 p.m. in the student center quad. The free event is open to the public.