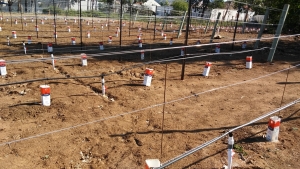 May 18, 2018 (Rancho San Diego) - A new half-acre vineyard at Cuyamaca College that is part of a groundbreaking viticulture apprenticeship program to meet a growing demand for skilled workers in the region’s wine making industry will be officially dedicated on June 4.

The viticulture apprenticeship program, the only one of its kind in California when it launched in the fall of 2016, is aimed at addressing a shortage of qualified workers knowledgeable about vineyard management practices, including irrigation, pruning, fertilization and harvest. It was supported through a grant of nearly $260,000, much of which went to develop the vineyard.

“Cuyamaca College for nearly 40 years has been playing a critical role in building our regional economy, and our new viticulture apprenticeship program will train the kind of skilled workers who are in demand by a rapidly expanding viticulture industry,” said Cuyamaca College President Julianna Barnes.

Graduates of the Viticulture Technician Apprentice program will leave Cuyamaca College with a firm understanding about all aspects of wine making, from growing the grapes to the production and selling of the beverage. Among other things, they will be prepared to work as vineyard managers, with vineyard management companies, or as consultants to boutique and private growers.

Cuyamaca College collaborated with the San Diego Vintners' Association, Fallbrook Winery, San Pasqual Winery, Highland Hills Winery and the Division of Apprenticeship Standards to host the viticulture apprenticeship program. The two-year program includes 14.5 units of horticulture classroom instruction and 3,000 hours of hands-on employment at one of the participating wineries and vineyards.

A 2015 report by the California Centers of Excellence,  a leading source of regional workforce information for the California Community Colleges system, found that 22 percent of small, owner-operated wineries and vineyards had difficulty finding qualified candidates for open positions, thus preventing their business from growing. That same report concluded California community colleges can support the wine industry by aligning curriculum to technical positions (except cellar workers); adding an internship component to the curriculum to provide students with hands-on experience that will better prepare them for entry-level employment; and maintaining and developing articulation agreements with enology and viticulture university programs.

San Diego County’s wine grape crop was valued at $4.2 million as recently as 2015, according to the county Department of Agriculture, Weights and Measures, with wine grapes being grown on nearly 1,000 acres that year. Vineyard planting in the state began in this region with Spanish Franciscan missionaries, and the direct economic output from locally produced wine is more than $70 million annually. California, the fourth leading wine producer in the world, crafts 85 percent of the wine consumed in the country, and the state’s wine industry employs more than 41,000 people, excluding seasonal and technical workers.