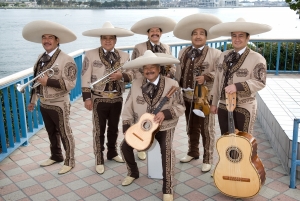 February 10, 2019 (Rancho San Diego) -- A wide assortment of musicians ranging from a San Diego mariachi band that has played at the Super Bowl to one of the most in-demand French hornists in the country will be performing in this year’s Spring Concert Series at Cuyamaca College beginning Feb. 28.

On tap for the Spring Concert Series:

Mariachi Real de San Diego. Founded more than four decades ago, this band has established itself as a mariachi leader and has performed in movies, two Super Bowls, a World Series, the Major League Baseball All-Star Game and countless festivals and corporate events.

French hornist Joshua Paulus. Paulus performs regularly with almost every major orchestra on the West Coast and is playing this season with the San Diego Symphony as Acting 2nd Horn. This concert, dubbed “Exploring the Fantasie,” includes guests Tina Chong on piano and Marcel Gemperli on viola. This recital explores the genre of musical fantasy by highlighting works written during the middle of the 19th century.

Kembang Sunda. Led by Cuyamaca College music instructor Amy Hacker, Kembang Sunda is an Indonesian Gamelan ensemble that has performed throughout Southern California since 2007. Gamelan ensembles developed in the ancient courts of Java and Bali, and primarily consist of tuned bronze percussive instruments.

Angham al-Sharq Eastern Melodies Ensemble. Al-Sharq has performed at Cuyamaca College on a number of occasions over the past several years.

The Nathan Hubbard Trio. The trio consists of a vibraphone, bass and drum and it uses modular notation, often with each member performing different pieces simultaneously, to create a kaleidoscopic sound where interplay between musicians switches at the turn of a page.

The Cuyamaca College Rock, Pop, and Soul Ensemble. Under the direction of Performing Arts Department Chair Taylor Smith, the ensemble will perform music from the Netflix sci-fi series Stranger Things. Stranger Things soundtracks are composed by Michael Stein and Kyle Dixon of the electronic band Survive.

The Cuyamaca College Concert Band wraps up this year’s Spring Concert Series with its second performance of the year.

Tickets are just $5 – the Coyote Music Festival is free – and can be purchased online via the Cuyamaca College Performing Arts Department’s webpage.