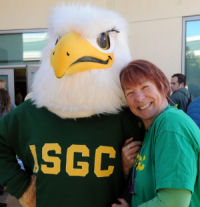 January 25, 2013 (El Cajon)--Spring semester begins January 28 at Grossmont and Cuyamaca colleges in a restorative vein, with hundreds of classes added back as the result of California voters’ approval of Proposition 30, the governor’s sales and income tax measure.

The November victory at the polls allowed the colleges to restore 235 course offerings for the new semester that had been cut when the Grossmont-Cuyamaca Community College District approved its budget .The action was taken to prepare for the worst-case scenario of the district losing $5.6 million in funding had voters rejected Prop. 30.

Peg Marcus, Grossmont College’s student body president, shares a laugh with the campus mascot, Gizmo, this week as the campus prepares for the start of the new semester Monday, Jan. 28.

While the clouds have lifted in a marked departure from the doom and gloom of recent semesters, district officials note that this is only the beginning of what is hoped to be a period of restoration. Four consecutive years of debilitating funding losses totaling $16 million to the district have forced the two East County colleges to slash 1,600 classes and to turn thousands of students away at a time of record demand.

Enrollment at Grossmont and Cuyamaca colleges has dropped about 15 percent from its peak in 2009. Today, the colleges serve about 25,000 students in its credit program and an additional 4,000 in its non-credit Continuing Education and Workforce Training program. As of this week, the waiting list for classes at both colleges was almost 17,000 seats.

“We’re grateful that voters understood the governor’s tax plan was essential to avoid further draconian cuts to education,” said Bill Garrett, president of the district’s Governing Board. “It appears the economic engine is sputtering back to life, although we’ve still got a long way to go to restore the classes we’ve lost.”

This month, Gov. Jerry Brown unveiled his budget plan for 2013-14 that proposes a $197 million boost for California community colleges, as well as $179 million to make good on funding commitments deferred during the recession.

Chancellor Cindy L. Miles described the governor’s proposal as “not a panacea, but moving in the right direction. It seems that we have finally found the bottom and we’re moving up again.”

After a prolonged period of devastating cuts, Miles said it is heartening to see the governor being proactive on community college issues, but cautioned that the governor’s proposed budget also contains major new policy changes that could have unintended consequences for students.

“The key is to make sure any initiatives address both student success and access,” Miles said. “It’s a great relief that a tourniquet has been applied to stem the bleeding, but all options must be carefully weighed to ensure the patient’s best mode of recovery.”

“With the passage of Prop 30, California voters showed their support for public education and the crucial role it plays in a healthy democracy, a healthy economy and a globally-competitive nation,” Cooke said at Grossmont College’s convocation, a traditional event kicking off the new semester. 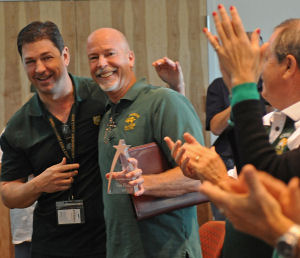 Both colleges took the opportunity at this week’s convocations to announce faculty and staff awards.

At Grossmont College, Tim Flood, vice president of administrative services, was presented the President’s Leadership Award. A constant presence on campus, Flood has been highly visible during the past 10 years of Prop R bond construction as Grossmont College’s point man for facilities.

Tim Flood, Grossmont College vice president of administrative services, holds the President’s Leadership Award trophy presented to him this week at the traditional spring convocation, marking the start of a new semester. Next to him is Jeff Baker, vice president of student services.

On a separate front, work is progressing on another successful ballot measure, Proposition V, the district’s new $398 million bond approved by East County voters to address longstanding facility, infrastructure, technology needs, veterans’ services and workforce training. The district’s updated facilities master plan, with a more detailed look at the placement of new facilities, is expected to be presented for approval by the district’s Governing Board on Feb. 19.

With the completion of the master plan, next steps include the selection of an outside firm to assist in project management, vetting architects, and doing a cost analysis for the construction, renovation and improvement projects. All of the work will be monitored by a citizen's oversight committee made up of representatives from the community.

“We’re very pleased that East County voters showed their confidence in our district by supporting Prop V,” Garrett said. “We plan to create facilities that will allow us to continuing providing a high-quality education to our students, while always watching the bottom line to ensure we spend every dollar wisely.”

For more information about Grossmont and Cuyamaca colleges, go to www.gcccd.edu.