June 2, 2011 (San Diego) – A sports utility vehicle struck two bicyclists Tuesday in a rollover crash on Highway 56 in Rancho Penasquitos, killing one cyclist and seriously injuring the other. The deceased has been identified as Nick Venuto of Poway, corporate controller of Sapphire Energy, a biotech company in Torrey Pines. Baron Herdelin-Doherty, president and CEO of the San Diego County YMCA, suffered broken bones in his hips, ribs and arms.

The motorist, Sheena Saranita, inexplicably lost control of the SUV, which went up an embankment and crashed through a fence before striking the two men.

Venuto was commuting home from work when he was hit. “Nick Venuto was a highly valued employee as controller for Sapphire Energy,” the company said in a prepared statement. “We all are deeply saddened by this sudden and tragic loss. Nick not only excelled in his contributions to help Sapphire grow, but he had an incredible passion and zest for life and was a loving father and husband.” 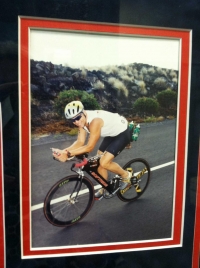 Herdelin-Doherty is a triathlete who frequently used the bike path, 10 News reports. He has been involved with the YMCA for 27 years, moving to San Diego from Texas last year to head up the nation’s second largest YMCA here.

His condition was initially reported as serious, but Shelly McTighe-Rippengale, a colleague of Herdelin-Doherty at the YMCA, told ECM this morning that according to family, he is stable and scheduled for surgeries over the next few days. “The path to recovery will be a long one, “ she said, “but he’s strong in mind, body and spirit, so we’re confident that he will recover.”

A statement on the San Diego County YMCA website indicates that “During this difficult time, we are committed to continuing the powerful work of the Y under the leadership of the YMCA Operations Council and the Board of Directors to ensure the smooth operation of the YMCA of San Diego County.”