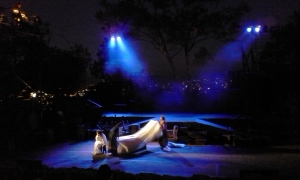 The post went up shortly after CYT President Janie Russell Cox held a press conference outside the national organization’s El Cajon headquarters to announce the shutdown, which she indicated does not affect CYT operations outside of San Diego County.

CYT was founded in 1981 by Paul and Sheryl Russell.  Their daughter, Janie Russell Cox, has been president since 2017 and has indicated that all of the sexual abuse allegations occurred before then.  She reportedly told the SDUT that she and her staff are cooperating with San Diego and El Cajon police departments on investigations.

Carrie Pavel wrote, “How about you straight up say that you stand with the survivors, instead of saying you won’t comment to protect all individuals involved? You’re protecting known predators.”

Many have faulted CYT for hiring Tony Atienza, a choir teacher and former CYT instructor rehired for online instruction during the COVID-19 pandemic, though he wound up not teaching.

A 2018 Voice of San Diego report revealed that Atienza, a former teacher of the year for Chula Vista High School, was the subject of a 2017 internal report by the Sweetwater Union High School District which found “severe and pervasive” actions and concluded that he had sexually harassed and groped at least three female students repeatedly.

Atienza has denied any wrongdoing and blamed the complaints on “three troubled female students” in his written response to the district, though some of the alleged actions were witnessed by other students. No criminal charges were filed against him, however he agreed to leave the district voluntarily; the district agreed not to tell other schools or prospective employers about misconduct findings.  The allegations included inappropriate touching, sexual comments, and reportedly trying to lure a female student to his hotel room during a trip to Disneyland.  Voice of San Diego contacted CYT at the time of its 2018 article, at which time CYT as well as Lakeside Middle School, where he had also taught; both said they had not been notified by Sweetwater of the misconduct findings. But CYT clearly knew about those findings when it tried to bring Atienza back for online instruction this spring.

Attorney Jessica Pride is representing four former CYT students . She claims the CYT founder Paul Russell had “acute and specific knowledge of the abuse that was happening”  and asked families to “forgive their predators and allow them to repent.  And allow them to still continue to teach these children,” the SDUT reports.

A woman who is now a preschool teacher has posted on her Facebook page that she was sexually assaulted by a CYT teacher starting at age 13. She asserts that the man put his hand up her shirt and rubbed the outside of her jeans while kissing her neck, until she started to cry and he took her home. But on future occasions, he would “push me into corners at events, kiss my neck, whisper in my ear.”

When she was 15, the woman continues, “I was at a sleepover with two other girls and he left me a voicemail detailing the things he wanted to do to me. My mom discovered this voicemail, brought it to the CYT organization and the cops, they listened to the voicemail and promised that he would be taken off the roster and not allowed to return.” But she adds, “He was back doing a show by Christmas.”

After CYT’s post yesterday on Facebook, the young woman wrote that she felt “sickened” by the response. She added, “They are not `deeply saddened’ to learn. Because they knew. Why don’t you go face my mother, who had to find a voicemail from her 15 year old daughters teacher, detailing the ways in which he wanted to violently assault her? Why don’t you face her, who STORMED into your office and begged for you to do something about it, and then you allowed this man to stay around CHILDREN.”  She says she has heard from 10 other women who described similar experiences at CYT after posting her story online.

Another poster left this message for parents of youths involved in the CYT program. “PLEASE!! Talk with your kids about their experience on what really happened behind the scene (especially since there were no outside parents allowed). The kids need to know, It is not their fault and they no longer need to carry guilt, shame or any other negative emotions that were forcefully pushed onto them. Praying for the victims.”

Yet another poster urged any victims to notify police.

But Joni Brobst voiced support in her post on the CYT Facebook page, writing, “Love you, CYT. You've done so much to support so many. I appreciate you so much.”