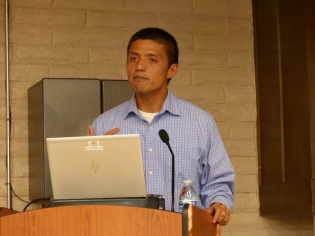 September 29, 2021 (La Mesa) – Hate crimes in California rose 30% in 2020 over 2019, when 1,015 hate crimes were reported, according to Leonard Trinh, lead hate crime prosecutor with the San Diego District Attorney. Hate crimes have been on the rise for several years, following a sharp spike after the election of Donald Trump as president.

The forum was hosted by the city’s Community Relations and Veterans Commission in partnership with La Mesa Conversations, the La Mesa Police Dept., and the D.A.’s office.

“Why do hate crimes matter to me?” asked Trinh, the son of Vietnamese immigrants.  He then recalled the fear and intimidation his family in Longview, Washington suffered after a neighbor destroyed Asian elements in the family’s garden.  “It made me super aware of bias, prejudice and stereotypes,” Trinh recalled.

Across the nation and locally, there has been a rise in hate crimes in recent years. Local examples include the shooting at the Chabad of Poway synagogue, arson at an Escondido mosque and a series of incidents targeting black students at San Diego State University including a hanging threat that was successfully prosecuted by the DA’s office.

“This is not unusual. It happens all the time,” Trinh said. The impacts can be devastating for survivors.  Trinh cited evidence presented in People v. McKenzie showing that hate crimes have a more debilitating effect on victims than other crimes cause.

Why the rise in hate crimes? “Biases are more open now due to social media validating those beliefs,” Trinh said. Trump’s vitriolic words also fueled a rise in hate. The week after the 2016 election, when Trump won, had the highest number of hate crimes ever recorded in the U.S., Trinh said.

What’s being done to combat this trend?

Locally, about half the cases prosecuted do end up in hate crime convictions, and most of the rest end in convictions for other crimes. Only a small fraction end in the accused perpetrator acquitted.

The problem lies in a large gap between the number of hate crimes that occur and the number referred for prosecutions.  The number one reason for not prosecuting a case is because the victim can’t identity who committed the crime. “These tend to be stranger on stranger crimes,” Trinh noted.  Other reasons are mistaken ID, claims of self-defense, or insufficient evidence of bias (such as using racial slurs).  Some victims may not report crimes at all due to fear of retaliation or deportation.

The D.A.’s office is required to provide protection for victims of hate crimes.  “We may ask the media not to show a victim’s face,’ says Trinh.  “We can’t detain a victim for immigration purposes and their immigration status cannot be introduced (in court).  We can get protection orders—they are issued all the time.” A protective order prohibits the accused from contacting the victim, he adds.

Which groups are being targeted as victims?

Last year, two-thirds of all hate crimes in our state targeted victims based on race, ethnicity or national origin.  Crimes against Asians increased in 2020 due to some blaming COVID on China and taking out frustrations on Asian-Americans. But the largest number of hate crimes – over half –targeted the black community.

In 2019, over half of hate crimes were based on race, ethnicity or national origin, with 20% based on religion and 20% on sexual orientation.

Crimes against Jews have also increased, as have crimes against transgender people, including seven murders of trans women in seven weeks nationally.

At least 10 hate crimes have occurred in East County in the past decade. Trinh gave several disturbing examples, including:

In addition to crimes, Trinh noted, “We’ve seen incidents of hate speech in East County in the past year.”  Examples include shoppers who wore masks with Swastikas and another who wore a KKK hood in Santee grocery stores. Those cases could not be prosecuted, since displaying such symbols is protected as free speech and the wearers claimed they were protesting mask mandates.  Similarly, a driver displaying a Nazi flag on I-8 did not commit a crime, though Trinh said, “If he does anything illegal, we know who he is.”

Speech alone can sometimes be a crime, such as making a criminal threat or inciting violence.

Hate crimes may target an individual or a group – and an action can be prosecuted as a hate crime even if the perpetrator got the victim’s identity wrong. For instance, if someone attacks a Sikh wearing a Turban because the attacker mistakenly believes the victim is Muslim, that’s still a hate crime.

The D.A.’s office prosecuted a case as a hate crime that involved a person who threw eggs at a reporter covering a Black Lives Matter protest, since the reporter was targeted for involvement with a racial group protected under state law.

A hate crime is a felony. It can attach to other crimes and add one to three years to the sentence.  If the defendant had a prior hate crime conviction, an extra year can be added; hate crime along with a buddy adds another two to four years. Hanging a noose or putting a terrorizing hate symbol such as a swastika on someone else’s property ads an additional year.

How to prove a hate crime occurred

To prove a hate crime, bias must be substantial against an individual or group protected by state law.

Bias can be proven by looking at statements such as racial slurs made during the crime, but also by examining social media accounts and statements made by the defendant to law enforcement – even in the past.  For instance, a medical student accused of a hate crime against an Uber driver locally had previously used profane language and slurs against a Mexican-American police officer and others.

Trinh warned parents that social media and chat forums such as Facebook, Twitter and Instagram are concerning; even more so are sites such as Parler with chat, videogame software, and sites such as Discord, FAB, 4Chan and 8 Chan “where white supremacists are recruiting kids ages 8 to 10. These sites are favorites of hate crime criminals,” said Trinh.

How to report a hate crime

You can report a hate crime by calling 911 or your local law enforcement agency. Be sure the police report includes information on any slurs used and how often the assailant used those slurs.  Provide a description of the perpetrator and his or her vehicle including license plate if possible. Photos and videos can help prove the case, but protect your safety first. 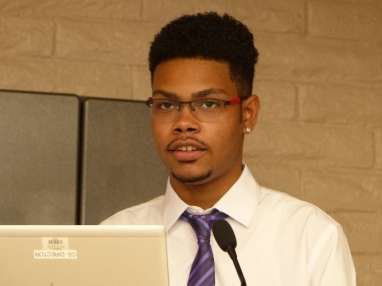 The forum also included a presentation by Helix Charter High School student Isaah Bordens on private prisons, which he called “systemically dangerous.” Currently around 150,000 prisoners are housed in private prisons in 31 states.

He noted that in the past, prisons focused on rehabilitation. But now private prisons are “profiting off the most desperate” without significant rehab, a situation he likens to human trafficking.  Private prisons seeking to reduce operating costs also often have fewer employees, lower pay, less training, and less security.

The U.S. Department of Justice has reported a 28% higher rate of assaults in private prisons, which Bordens says contribute to challenges in society by withholding rehab services.  “It’s more than for profit. It’s for hate,” he stated.

Bordens urged people to speak out to educate decision makers and the public, citing Martin Luther King who once observed that “hate begs hate.” Bordens concluded, “We must meet hate with love.”

Hate crimes are very sad and San Diego prosecutez them to the victims' maximum statutory ability. Our District Attorney, for San Diego County, here, is the Honorable Summer Stephan. S/he brings attention to the plight of our communities, and responds, as best s/he can.