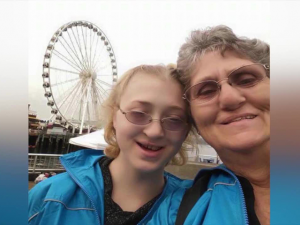 October 14, 2015 (La Mesa) –The bodies of Marshelle Newby, 56, and a second female were found inside a home on Avoyer Place in Casa de Oro near Mt. Helix Wednesday morning.  Newby worked as a legal secretary at the District Attorney’s criminal division for the past 23 years.

10 News reports that family and a neighbor identified the second body as Newby’s 16-year-old special needs granddaughter, Emily, whom she has raised as her own.

Tanya Sierra, public information officer for DA Bonnie Dumanis, stated, “Marshelle Newby was an outstanding DA employee for 23 years. Our office is grieving and our hearts go out to her family and friends,” KUSI reports.

A neighbor who went to check on the pair after not seeing them for about a week detected a foul odor. According to the Sheriff’s office, the citizen then flagged down a California Highway Patrol vehicle shortly after 8 a.m.. The bodies were found in a back bedroom.

Deputies from the Sheriff's Rancho San Diego Station and Sheriff's Homicide Detail are investigating. According to Lieutenant Kenn Nelson, “There are no signs of forced entry or a struggle. There are no outstanding suspects in this case.” The two women appeared to have been dead for about a week.

KNSD reports that authorities indicate a note was found near the bodies, but he declined to divulge the contents.

Cause of death will be determined by an autopsy by the County Medical Examiner.

I will forever miss two of my Beat Friends. I love you two. I know there are a lot o people up there in heaven please have a goodtime,