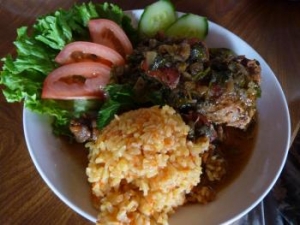 February 1, 2014 (La Mesa)--With a focus on Russian and Ukrainian dishes, The Village House Kalina does an excellent job of capturing the tastes and culture of these countries. 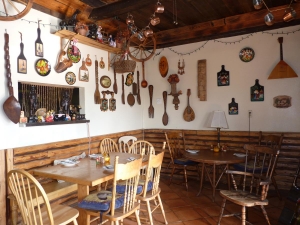 Aside from the beautiful and well maintained garden which is displayed in front of the restaurant, the restaurant's exterior seems modest. Yet despite the modest exterior, upon stepping inside I immediately felt as if I had traveled into a different country.

Noticing the Ukrainian flag hung on the wall, the many Russian nesting dolls scattered all over the place, and balalaika, I can without a doubt say that the decorators succeeded--and so did the chef. 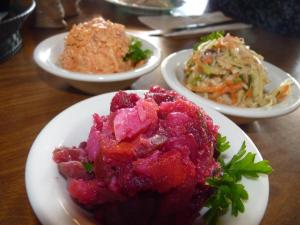 Not only is the restaurant filled with Russian/Ukrainian culture, but the menu is as well - with a wide variety of dishes that range from Ukrainian borscht to Pelmeni style dumplings.

Although I'd never heard of half the dishes before, I immersed myself completely and ordered a three course meal.

I started off with a delicious vegan beet salad, followed by a savory meatball soup, and to top it all off, The Georgian Eagle - which served with mints and herbs, consisted of large cuts of chicken, onions, tomatoes, and basil. 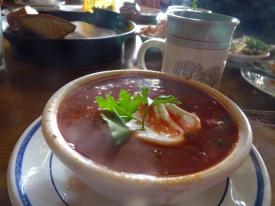 My companions took the same route as I, both ordering a three course meal. 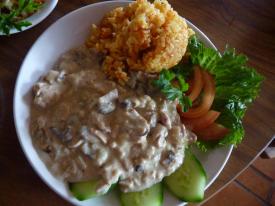 Julian began with a carrot salad, then moving onto the Ukrainian borscht soup, and last but not least, the chicken stroganoff which was hearty and filling.

Miriam decided to begin with the vesna salad with apples, cranberries and more, then move on to the vegetarian borscht, and finished it all of with pelmeni style dumplings.

The prices for the amount of food we received were more than fair - the waitress humble and kind - and the experience overall was fantastic. The Village House Kalina is a great place to eat no matter your diet. 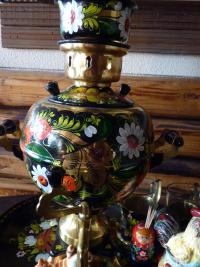 Or as they would say in Russia, “Ochen vkusno!” (Very tasty.) 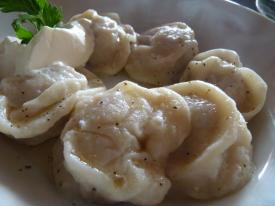 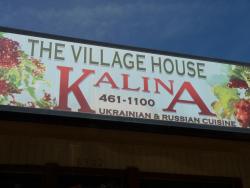