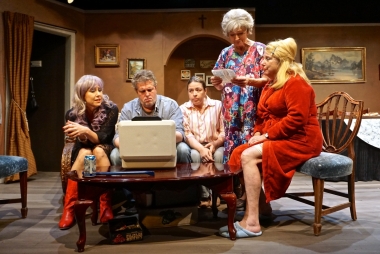 September 2, 2017  (La Mesa) -- Magnetic. Daddy's Dyin' Who's Got The Will, by Del Shores, master of Texas comedies, draws you in like sweet potato pie at Thanksgiving. This Lamplighters Theatre production has lots of rich characters--sweet and naughty.

It’s not as funny as I thought, but my days are long. I loved being a fly on  the wall of the Turnover home for a couple hours.

The story takes place in the living room/dining room of the Turnover farmhouse, one half mile outside Lowake (Lo-way-kee). Texas.

I love Texas comedies. The characters are so great. I often wonder if Texans feel the same. Daddy's Dyin' Who's Got The Will is no exception. Director Jerry Plato says the show was difficult to cast because so many people showed up. Decisions might have been hard, but he made the right ones. This cast of eight made the perfect Turnover family, plus one.

Daddy Turnover has a heat attack and is coming home from the hospital. He isn't expected to live long, and his children gather to take up watch. We watch as these wonderful characters captivate us and make us part of their world. 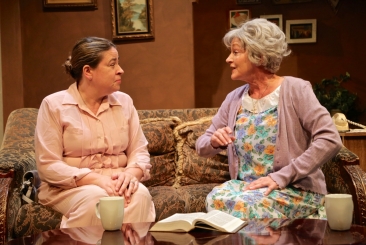 My favorite character was Murlene, played by Shannon O'Brien. Perhaps she's the one I identified with most. Sweet, unappreciated and not realizing she wanted more. Shannon was adorable. A close second was Bill Shore (no relation) as Harmony. He was a master as the non-family member.

Mama Wheelis, the head of the family, is played by Sandy Hotchkiss. She’s right at home. Lurlene, played by Cheryl Livingston, the religious one of the family, is such a natural in these type of roles. Steve Murdock, playing Orville, was outstanding. I did not even recognize him. Devi Noel played the loose Evelita and brought spunk to the family. Christine McCay played Sara Lee and Paul Uhler brought Daddy Buford to life--a difficult role, acting in you own world.

Beat the September heat with a night at the theatre.

The Tin Woman - A story with a little more heat

Enjoyed reading your review. However, there are perhaps two corrections. The actor's first name who plays Harmony is Bill not Del. You might check further but I do believe Daddy comes home from the hospital after a heart attack not a heat attack