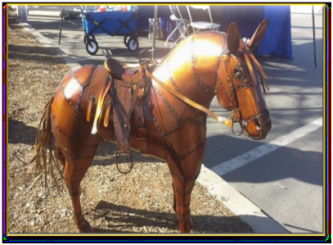 August 15, 2015 (Alpine)--A horse statue stolen from a front yard in Alpine is back home with its owner. The $650 bronze and copper decorative horse was found on a dirt road near the 700 block of South Glen Oaks Road in Alpine just after 9:00 a.m. on Saturday, August 15th.

A driver passing by saw the horse on the road and called the Alpine Sheriff's Station after recognizing the horse from a community safety bulletin.

"Daisy," as her owners call her, has a few dents, but is not damaged. There are no surveillance cameras in the area. It's not clear who left "Daisy" on the road, but she was dusted for prints before being returned to her happy owner.

The investigation is ongoing and anyone with information on who stole "Daisy" is urged to  call the Alpine Sheriff's Station at (619) 659-2600.