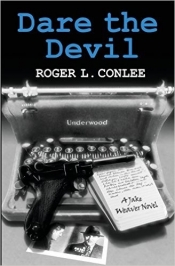 September 12, 2015 (Lemon Grove) "– Not long ago, author Roger Conlee gave a gripping lecture on Fog and Darkness, his dramatic story of a journalist and a Marine navigating the final years of World War II. It was “vintage Conlee, the tale-spinner of 20th century history,” says Helen Ofield, president of the Lemon Grove Historical Society.

Now Conlee has a new book, Dare the Devil, “ set in 1940s Los Angeles, where gangs, cops and strange earthlings inhabit the mean streets.  Conlee tells all on Sept. 23 at 6:30 p. m. in the Lemon Grove Library (3001 School Lane in Lemon Grove).  A book signing will follow the presentation.

Ofield writes, “Dare the Devil is pure noir.  It stars investigative reporter Jake Weaver, who never takes it on the lam. He's too busy exposing rotters like Bugsy Siegel and Jack Dragna no matter the danger to himself or his wife and child. Confounding matters is the abrupt arrival of a gorgeous Brit spy from Weaver's checkered past.  Oops.  She wants to re-ignite an old flame while rooting out a fugitive Nazi war criminal, now haunting Hollywood and Vine.”

She adds, “You get it, you reader, you.  Weaver is daring the devil.  You do the same on Sept. 23.  And don't be shocked, shocked when some really strange people show up in the Rosemary Putnam Community Room. They love books, too -- and, hey, this is Lemon Grove, home of The Big Lemon, The Big Murals, The Big Bakery and The Big Bookstore (inside the library).”