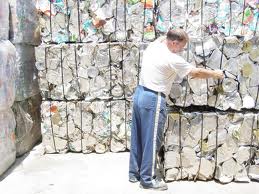 “We understand his condition is improving,” said John Snyder, general manager at EDCO.  Snyder declined to provide the worker’s name or details of his injuries, citing medical privacy laws. But he said the man, 57, is a long-time employee.

As for how such an accident could happen, Snyder responded, “We’re not going to comment on how it occurred.” He insisted that EDCO has “a serious safety culture.”

Asked what steps EDCO has taken to prevent a similar accident from occurring again, Snyder replied, “We’ve reviewed our internal procedures that were already in place and reaffirmed those procedures.” Snyder claimed that workers “were doing what they shouldn’t have been doing.”

A Heartland Fire dispatcher told ECM news partner 10 News that the worker was cleaning the packing machine when it accidentally started up. They may have been in the machine for as long as 10 to 15 minutes before anyone realized he was inside, 10 News reported. He was rushed by paramedics to Scripps Mercy Hospital, where he was reportedly fighting for his life after the horrific accident occurred.

The incident also raises serious questions about the safety of recycling facilities. Popularity of recycling has risen sharply, as more and more Americans recycle paper, plastics and other materials that formerly wound up in landfills. But while going "green" is a laudable goal, there is a dark side to the industry.

According to the U.S. Department of Labor’s Bureau of Labor Statistics, solid waste and recycling collection is the 7th most dangerous industry in America, with 26 fatalities in 2010. Many were traffic accidents, but six were equipment related.  While 2011 records are not yet available, our research found numerous deaths at recycling centers nationwide reported in the media.

The problem isn’t limited to America. “The waste industry has the unenviable reputation of having a fatal incident rate that is more than 10 times the national average and a reportable accident rate that is more than four times the national average,” Materials Recycling Week , a British publication, reported in 2009.  Britain’s waste and recycling industry pledged to attempt to reduce fatalities by 10 percent, a goal one industry spokesman described as “challenging”, according to the article.

“Recycling centers in particular have gotten our increased attention because they are inherently dangerous and typically non-unionized. That’s been one of the things we’ve been focusing on statewide,” Lorena Gonzalez, Secretary-Treasurer of the San Diego-Imperial Counties Labor Council told ECM, adding that the industry attracts many immigrant workers who may not be properly informed about safety procedures.

“There were two young kids, 16 and 22, killed in the central valley last year at a recycling plant," Gonzalez recalled. "The 16 year old was working with a fake ID.” The two brothers were working side by side cleaning a tunnel when they were overcome by toxic gas.

There have been serious non-fatality accidents as well; most recently on January 11, 2012 two workers at an Austin, Texas recycling facility suffered burns when a flash explosion scalded them with hydraulic fluid.

Better training for workers as well as equipment inspections and stringent safety procedures can all help to lessen the risk of serious injury or death.  But several of the facilities where fatalities occurred had repeatedly violated such procedures and been fined multiple times.

“When there is a union at a facility, you have people right there who are checking safety standards,” Gonzalez noted.  “Without a union, you can’t complain or even file a complaint with OSHA without worrying about your job.”  Some employers may retaliate against workers who file complaints. Non-union workers are also left apt to be familiar with industry safety standards, Gonzalez said.  While some Los Angeles trash companies are unionized, thus far, San Diego’s waste disposal companies and recycling facilities are all non-union, she added.

ECM has requested county records to determine whether the Lemon Grove EDCO facility has had any prior county violations and will publish results when received. We have also contacted Supervisor Dianne Jacob’s office to inquire if San Diego’s Supervisors are looking into the EDCO accident. We have also requested safety records on EDCO’s recycling operations from the California Occupational Safety and Health Administration (CAL-OSHA).

The San Diego office of CAL-OSHA has opened an investigation and visited the Lemon Grove EDCO facility after the accident.  “They have an open investigation which consists of interviews with witnesses, other employees; it can take six months but is typically completed in two to four months,” said Patricia Ortiz at Cal-OSHA, who declined to provide additional details until the investigation is complete.