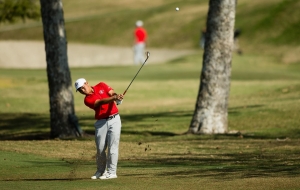 February 25, 2019 (Westlake Village, Calif.) - The San Diego State men's golf team remains in a three-way for seventh place at the Southwestern Invitational after play was suspended toward the end of the second round on Monday due to darkness.

The Aztecs, who sit at 13-over par with San José State and Loyola Marymount, had one starter, Puwit Anupansuebsai (Nakhon Phanom, Thailand), and one individual competitor, Ambrose Abbracciamento (Newtown, Pa.), still on the course when play was suspended at the par-72, 6,992-yard North Ranch Country Club. Earlier this morning, the Scarlet and Black also endured a slight delay for frost prior to teeing off for round one.

San Diego State completed the first 18 holes in a tie for fifth place with SJSU after posting a collective 5-over 293, but slid two spots in the standings behind five schools that completed both rounds, including front-runner USC (-7), while UCLA (-2) occupies the second position, followed by California (+2), Tennessee (+5) and host Pepperdine (+8).

Individually, Joey Moore (Billings, Mont.) leads the quartet of Aztecs who finished 36 holes on Monday, landing in the eighth position at 1-under 143 with cards of 70-73. In the round one, the SDSU freshman found himself at 2-over through five holes but played spot-free golf the rest of the way, including four birdies on his first six holes after the turn. Among his conversions was an impressive make on the par-4, 416-yard No. 14, which ranked as the second-toughest hole of the day.

In the afternoon, Moore managed to ease the sting of four bogeys with three additional drains, including a successful drain on his finishing hole at the par-4, 424-yard No. 18, which followed a stretch of seven pars on his previous eight greens.

In addition, Christian Banke (Danville, Calif.) climbed 26 notches into his current 17th-place standing at 2-over 146 after firing rounds of 76-70. The Aztec sophomore sank just one birdie in the round one but rebounded in a big way with five conversions in the afternoon, including back-to-back drains on No. 6 and No. 7 to help offset three bogeys.

Elsewhere, Anupansuebsai finds himself in a tie for 25th at 4-over for the tournament with three holes remaining in the second round. The SDSU sophomore was 2-under for the morning round after making the last of his three birdies on the par-5 No. 12, but had to settle for a 74 after posting two bogeys and a double on his final five holes. Anupansuebsai also notched on birdie on the 12th green in the afternoon but was hampered by three additional bogeys.

Making his first varsity start for the Scarlet and Black, Newport Laparojkit (Montebello, Calif.) ended the day in a tie for 48th at 9-over 153 after logging scores of 74-79. The junior transfer was tied for 27th after the morning session after countering six bogeys with four birdies, including back-to-back successes on the sixth and seventh greens. Later, Laparojkit was 1-over for round two after sinking a birdie on the par-3, 235-yard No. 8, which ranked as the most difficult hole of the day; however, four bogeys on the back nine, as well as a double on the par-4 14th, hastened his drop.

Sophomore Zihao Jin (Beijing China) remains one shot behind Laparojkit in a tie for 50th after carding a 75 and 79. The Rancho Bernardo High alumnus overcame a wobbly start in the opening round with seven pars and one birdie after the turn but could not carry the momentum into the afternoon, suffering three bogeys and two double bogeys on the front nine of round two. Still, Jin managed to regroup somewhat, notching six additional pars to go with a birdie at No. 12.

Rounding out the Aztec delegation was Abbracciamento, who finds himself in a tie for 52nd at 11-over for the tournament. The Aztec junior experienced a dearth of birdies en route to an opening-round 81, but has minimized the damage through 15 holes in round two, where he has offset two bogeys and a double with birdies on the sixth and 15th greens.

The Southwestern Invitational resumes on Tuesday with the completion of round two, starting at 7:30 a.m. PT Teams will be subsequently re-paired into tee times for the final round.

Day One Results (all final except where noted)