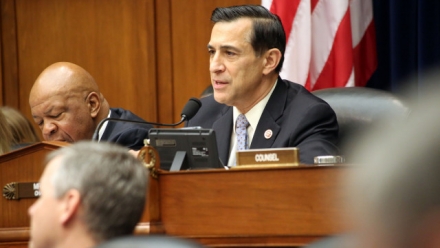 “Quite frankly, if I’m not confirmed by Nov. 3 [to the U.S. Trade and Development Agency], then I expect I’ll be a candidate for the congressional seat,” Issa told Roll Call, a Washington news outlet.

President Trump nominated Issa to be director of the agency on Sept. 19, 2018, “but his nomination has not seen the light of day in the Senate,” Roll Call reported.

The 65-year-old former North County congressman says Hunter, the indicted fellow Republican, has “nothing wrong” with his voting.

Issa, who served nine terms in the 49th District, has been fund-raising for the 50th District race since last month. So has fellow GOP luminary Carl DeMaio — one of six announced Republican challengers in the race. Ammar Campa-Najjar is the main Democrat in the race.

In a “Dear Patriot” letter dated Aug. 22, Issa noted his setting up an exploratory committee for the Hunter seat.

“I left Congress with a plan to play a pivotal role in the Administration,” said the letter received by an Escondido resident. “If not for my ongoing conversations with the President about serving this side, I would have stayed and continued to fight in Congress.”

Roll Call said Democratic Sen. Robert Menendez of New Jersey of the Foreign Relations Committee has been stalling nominations of Issa and others.

“If not for Democrats in the Senate filibustering important confirmations, I would already be hard at work for the American people in this post,” Issa wrote, saying Menendez has a personal vendetta against him for his work holding President Obama and other Democrats “accountable for their many abuses of power.”

Issa was chairman of the House oversight committee and held hearings on Secretary of State Hillary Clinton, Attorney General Eric Holder and others.

Democratic Rep. Mike Levin won Issa’s seat in November, defeating the GOP’s Diane Harkey by 12 percentage points. Issa announced in January 2918 that he wouldn’t run, having been named one of the most vulnerable Republicans that year.