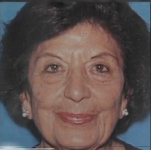 Ghazal “Gazelle” Ybarra Mansury and her boyfriend were questioned after the search led authorities to find the body.  Mansury was later arrested and charged with first degree murder.

Fingerprints were used to identify the body, which had been reportedly damaged by animals.  An autopsy did not reveal cause of death; further tests are pending.