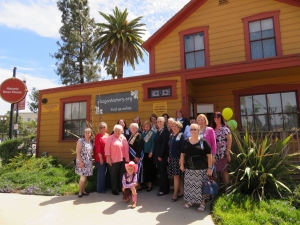 Article and photos by Robert Gehr © 2018

April 23, 2018 (El Cajon) -- The Letitia Coxe Shelby Daughters of the American Revolution (DAR) chapter in La Mesa held a dedication ceremony for a Knox House Museum historic marker on Saturday at the Olaf Wieghorst Museum and Art Gallery in the heart of downtown El Cajon.

Mayor Bill Wells presented DAR with a certificate of appreciation from the city of El Cajon. A benediction and prayer was given by Chaplain Judith Diener 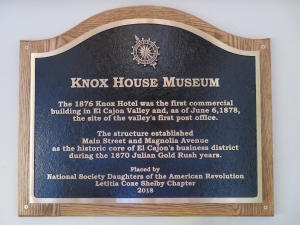 Others received certificates of appreciation from the Letitia Coxe Shelby chapter for their dedication in making this happen:  Kathleen Fiedor, Eldonna Lay, Carla Nowak, and Earlene Hollmichel.

After the certificates were handed out - with much applause from everyone - refreshments were served to the attendees, including a cake designed to look like the Knox House Museum, which made quite an impression.

Shortly thereafter, everyone met up at the Knox House Museum to socialize and of course visit the historic building and admire its contents of yore, reminisce about the past and what life must have been like for people such as Amaziah Knox and his family.

A fun, and informative tour was given at the Knox House Museum for the guests as well. For some, this was their first visit to the quaint museum, and they will likely return. There’s much to see in this old building.

You can visit this interesting place at 280 N. Magnolia Ave. on the corner of W. Park Ave. near downtown El Cajon. 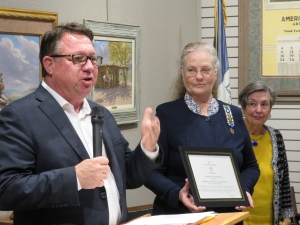 Photo, left:  Mayor Bill Wells presenting DAR with a certificate of appreciation from the city of El Cajon.

Founded in 1890, the DAR foundation promotes historic preservation, education and patriotism. Members are descendants of patriots who were instrumental in winning American Independence during the United States Revolutionary War of 1775-1783. Read all about it at: https://www.britannica.com/event/American-Revolution

There are currently around 185,000 members affiliated with 3,000 chapters worldwide serving in of the world’s largest, most active service organizations. 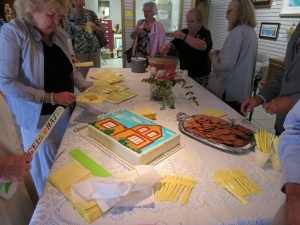