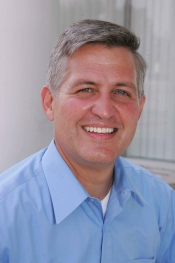 May 8, 2012 San Diego)--Solana Beach City Councilman Dave Roberts likes to describe himself as a “passionate moderate” who is more interested in getting things done then towing a party line.

He is running for the third District Supervisorial seat currently held by 20-year incumbent Pam Slater-Price. Slater-Price decided not to seek reelection for what would have been a fifth term, thus breaking up a board of five members who have served together for 17 years.Roberts’ main opponent is Congressman Brian Bilbray’s Chief of Staff Steve Danon.

A Democrat in a slightly Republican leaning district that nevertheless voted for Barack Obama in 2008 and Jerry Brown in 2010, Roberts has been endorsed by a number of high-profile Republicans, including Slater-Price and former San Diego Police Chief and County Sheriff Bill Kolender. (See editor's note below)

“After careful consideration - weighing the backgrounds, the documented track records of the candidates and looking closely at the personal qualities of the candidates — I am supporting Dave Roberts. I strongly believe that partisan politics has no place in doing what is best for San Diego County. I am endorsing Dave Roberts because of trust. I trust him to do what he says he will do. I know that the public can put their trust in him. I want honesty in my elected officials,” said Slater-Price.

Slater-Price was widely rumored to have resented Danon’s efforts to push her into retirement. Her endorsement of Roberts was expected. But the real coup for Roberts was when former Sheriff Kolender endorsed his campaign.

"Dave Roberts works diligently to promote safe communities," said Kolender. "He has been a great friend of the Sheriff's Department and worked tirelessly on the regional SANDAG Public Safety committee and the League of California Cities Public Safety Policy Committee to reduce gang violence, step-up graffiti abatement efforts, and support initiatives to combat Internet Crimes Against Children. His track record speaks for itself.”

Roberts once supported Bilbray, then challenged him for Congress in 2010, deciding he was too conservative for the district.

eir employer within 300 days, if the employee was found to have been discriminated against in their pay),” said Roberts. “When I supported him ... it was because I thought he was a moderate Republican with a good record of working with all sides. Now I feel he has become part of the extreme right of the GOP. He is out of touch with the voters of this district," said Roberts during the race.

Challenging Bilbray‘s Chief of Staff now in the race to succeed Slater, the 50-year old Roberts argues a similar tact: that partisan politics is out of step with the voters of the area and Danon is too politically motivated to do the work.

“Danon’s a political party insider with no elected experience. He’s a conservative partisan in a time when people seek leadership, not partisanship,” Roberts told ECM. “My experience is bringing people together, regardless of party, to accomplish things.”

His background includes a career working within the healthcare business unit of Science Applications International Corporation, and starting his own firm managing condominium and rental properties. After nine years as a civilian employee with the Pentagon, he came back to Washington D.C and took a position on the House Appropriations Committee staff. He boasts of helping to create the Department of Defense’s TRICARE healthcare program that is now used by the U.S. military.

“Prior to this legislation, veterans were forced to leave the military healthcare system and enroll in Medicare, which denied many rehabilitative benefits available to military veterans,” says Roberts on his web site. “(We helped) expand military healthcare to include dental coverage for all military beneficiaries ... which allowed 100 percent disabled military veterans to continue to keep their military healthcare benefits after their disability. (We also) helped draft legislation that increased funding for both breast cancer and prostate cancer research and treatment within the Department of Defense,” added Roberts.

Robert’s politics have always been centered in the middle. Though never a registered Republican, he has worked for and endorsed Republicans, including Bilbray over Democrat Francine Busby in 2006. Roberts was elected to the Solana Beach City Council in 2004 and he switched his party registration to Decline To State because he said at the time the local office was not a partisan position.

In 2011, he endorsed Republican District Attorney Bonnie Dumanis for Mayor of San Diego. Democrats complained loudly, including San Diego Democratic Party chairman Jess Durfee, who had issued a letter in 2011 to all elected Democrats warning them  not to endorse any Republican candidate for Mayor.

“I have known Bonnie for a decade and worked with her on a number of projects,” said Roberts. “At the time the only announced candidates were Bonnie and Carl DeMaio and of the two, I was definitely for Bonnie. When Bob Filner (the only Democrat running in the race for San Diego Mayor) announced his candidacy, I did what many have done before and issued a dual endorsement, supporting Filner and Dumanis.”(see editor's note below)

He has been since endorsed by Durfee and the Democratic Central Committee. He said Durfee was angry with him initially, but influenced Democrats to endorse his campaign by noting that if he succeeded, he would be the first Democrat elected to the Board of Supervisors in almost 20 years.

He would also be the first openly gay member of the Board. Throughout his career, Roberts has been open about his homosexuality. He proudly mentions that he is the father of five with his partner Wally Oliver. But he has not as yet tried to utilize his campaign as a magnate for gay rights ... or activist gay money.

"Being gay has nothing to do with my decision to run and I don't think voters care about a person's orientation," said Roberts. "I've heard the speculation that I became a Democrat because of Proposition 8 (the anti-gay marriage initiative passed by voters in 2008). But I am running because voters in my district asked me to and I have a pulse on what voters in the 3rd District care about. I have a long history of community involvement and I think Danon's conservatism is out of step with the majority of voters here. I am reaching out to all voters in the district and not any specific group.”

Roberts noted that he grew up in Connecticut and first worked in politics was for Senator Edward M. Kennedy's 1980 campaign for President. He then worked his way through college as a member of Lowell Weicker's staff.

“I worked for the Senate Subcommittee on the Handicapped, and was instrumental in the passage of federal legislation to extend the length of time that mentally challenged youth are allowed to stay in public schools from age 18 until 21,” said Roberts.

He said his experiences with Weicker and the Republican Party of New England formed his philosophy of fiscal responsibility with social liberalism. He noted the tradition of this wing of the GOP embodied in figures such as Weicker, New York Republicans Nelson Rockefeller and Jacob Javits, and progressive California Republicans such as former Governors Hiram Johnson and Arnold Schwarzenegger.

“Weicker was from that rare breed of Liberal Republicans who were pushed out of the party by conservatives during the 1980s and up to the present,” said Roberts during his race for congress in 2010. “But I stayed a Democrat while working for him. I worked on voter outreach among veterans for the Clinton-Gore reelection campaign in 1996. In 2000 I was a (campaign) coordinator for Al Gore," said Roberts.

On a range of issues, Roberts is ideologically consistent with President Obama, though he has declined to say whether he will support the president for reelection. In the 2010 campaign he was adamant about his support for the president’s healthcare plan, now known as “Obamacare.”

"All Americans must have healthcare coverage and we can no longer allow people with pre-existing conditions to be excluded," said Roberts in 2010. "I support some effort at tort reform, and I think each state should have the right to decide their own reforms, but I would hope that a public option would be available as an option for the states. A trigger mechanism for implementing a public option if the private insurers do not lower costs and expand coverage might be a way to go. But the fundamental issues are expanding coverage, lowering costs, and encouraging more people to go into the healthcare professions, so we do not face shortages because there are not enough doctors and nurses out there."

On land use and planning issues, which occupies as much as half of the Supervisors time, Roberts recently endorsed the Building Industry Association backed plan known as “The Red Tape Commission.” But he broke with the commission’s chief proposal to eliminate planning groups in the unincorporated communities. When the Board voted unanimously against eliminating the planning groups last March, Roberts lauded the Supervisors.

"This was the right thing to do," said Dave Roberts, who had testified in front of the Board of Supervisors on the issue. "I support reducing red tape wherever possible, but local input for a proposed project is a critical part of the Board's decision-making process."

During his testimony, Roberts reminded the Board that one of the main reasons his home city of Solana Beach incorporated more than 25 years ago was due to residents' complete frustration with the county over imposing unwise planning decisions on the community without listening to local concerns.

"Those who are most impacted by planning decisions should be able to be a part of the approval process," said Roberts.

Editor’s note:  After this article was published, Roberts contacted ECM to indicate that his endorsement by Kolender had been retracted.  In light of the endorsement withdrawal, Roberts asked ECM to inform readers that he has been endorsed by Lt. Gen. (ret.) James R. Peake, former Secretary of Veterans Affairs under President George W. Bush.  According to Roberts, Peake stated,”I have known Dave for decades and know firsthand his bipartisan work at the national level serving as a true champion for the military and our veterans.”

Roberts also informed ECM’s editor that he never endorsed Filner, but rather withdrew his endorsement of Dumanis and opted to make no endorsement in the race. The reporter, E.A. Barrera, stands by his story and further notes that Roberts told him that “dual endorsements are common” in such situations.