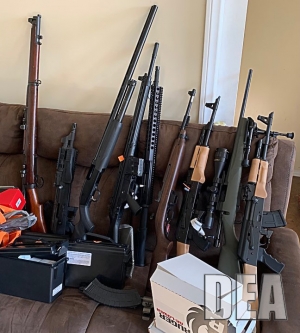 East County News Service
Photos via DEA: seized drugs and guns in the San Diego region
March 11, 2020 (San Diego) --  The U.S. Justice Department and the Drug Enforcement Administration today announced results of Project Python, a DEA-led interagency operation targeting the Cártel de Jalisco Nueva Generación (CJNG).  The six-month investigation has resulted in over 600 cartel associates arrested nationwide and 350 indictments, as well as major seizures of drugs, guns and cash.
San Diego and Imperial County DEA investigations related to Project Python have resulted in the arrest of over 130 cartel associates and seizure of approximately 3,282 pounds of methamphetamine, 59 kilograms of heroin, 198 kilograms of cocaine, 44 kilograms of fentanyl, 2 kilograms of opium, over 27,000 fentanyl pills and 18 firearms. This included drugs found under children’s car seats, in tiers and under hoods, as well as a variety of guns. 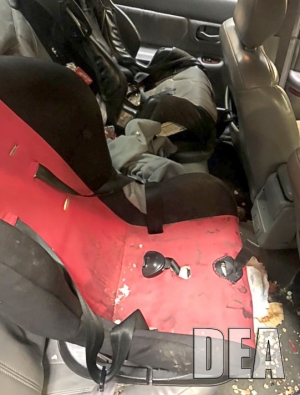 Photo, right: Carseats over concealed meth
Special Agent in Charge John Callery says the Cártel de Jalisco Nueva Generación has exploited children in the San Diego and border area to smuggle deadly drugs into the U.S.  He adds that the DEA “will continue to attack these callous and immoral criminals from top to bottom until they no longer exist.”
Acting DEA Administrator Uttam Dhillon says, “Project Python is the single largest strike by U.S. authorities against CJNG, and this is just the beginning.” He adds, “Today, DEA has disrupted CJNG’s operations, and there is more to come as DEA continues its relentless attack on this remorseless criminal organization.”
The action was part of fulfilling a presidential executive order to identify, disrupt and dismantle transnational criminal organizations.
The cartel targeted in this operation is one of the fastest growing transnational criminal organizations in Mexico, and among the most prolific methamphetamine producers in the world, according to a press release issued by the DEA.  It is also  responsible for a significant proportion of drugs entering the United States, and elevated levels of violence in Mexico. 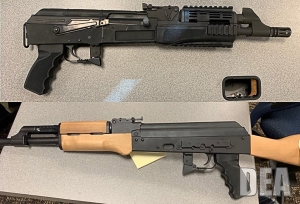 Criminal Indictments related to the Project Python operation against the cartel have been brought against Nemesio Ruben Oseguera Cervantes, also known as “El Mencho,” whom the DEA indicates is the leader of CJNG, though he remains at large.
Last month, El Mencho’s son, Ruben Oseguera Gonzalez, also known as “Menchito,” and second in command of the cartel was extradited from Mexico to the U.S. on charges of alleged drug trafficking and firearm use related to drug trafficking activities. On Feb. 26th, El Mencho’s daughter, Jessica Johanna Oseguera Gonzalez, was arrested in the U.S. on financial charges related to her alleged criminal violation of the Foreign Narcotics Kingpin Designation Act.
Additionally, DEA has worked with its interagency partners to apply further pressure to CJNG. The U.S. Department of Treasury has designated El Mencho as a “specially designated narcotics trafficker” pursuant to the Foreign Narcotics Kingpin Designation Act, and the U.S. Department of State has issued one of the largest narcotics rewards ever – $10 million – for information leading to the arrest of El Mencho.