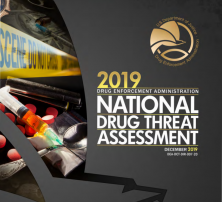 “This year’s report illustrates a shifting drug landscape in the United States,” said Acting Administrator Dhillon. “We’re pleased that in 2018, drug overdose deaths declined over four percent overall, with even greater decreases – over 13 percent – in overdoses from controlled prescription opioids. Many challenges remain, however, including the spread of fentanyl and methamphetamine across the country. DEA and its partners will continue to work diligently to combat the drug trafficking organizations that bring these deadly substances into our country and endanger the American people.”

“Unlike other cities, San Diego faces unique challenges by being on the U.S.-Mexico border,” said San Diego Special Agent in Charge John W. Callery. “In 2018, the DEA San Diego seized record amounts of methamphetamine and deadly fentanyl. While our battle with the Mexican drug cartels persists, our agents are more committed than ever to stemming the flow of these deadly drugs entering our community and effecting the lives of our friends and families.”

Illicit drugs, and the criminal organizations that traffic them, continue to represent significant threats to public health, law enforcement, and national security in the United States. As the National Drug Threat Assessment describes, the opioid threat continues at epidemic levels, affecting large portions of the United States. Meanwhile, the stimulant threat, including methamphetamine and cocaine, is worsening and becoming more widespread as traffickers continue to sell increasing amounts outside of each drugs’ traditional markets.

The National Drug Threat Assessment provides a yearly assessment of the many drug abuse and drug trafficking challenges local communities face. Highlights in the report include usage and trafficking trends for drugs such as prescription drugs, heroin, methamphetamine, cocaine, marijuana and the hundreds of synthetic drugs. New to this year’s assessment is an expanded section on gangs - including street gangs, prison gangs, and outlaw motorcycle gangs – which now details gang activity geographically by DEA field division.

The assessment factors in data from many sources, including drug seizures, drug purity, laboratory analyses, information on the involvement of organized criminal groups, and survey data provided to DEA by state and local law enforcement agencies across the country.

The National Drug Threat Assessment can be accessed at https://go.usa.gov/xdjnt .