County Officials Urge People to Follow Three Rules to Protect Themselves, Others 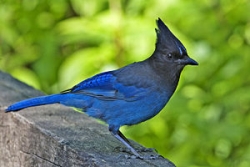 August 23, 2010 (Pine Valley ) -- A Stellar’s jay found dead in Pine Valley tested positive for West Nile virus, County Vector Control officials announced today. Although no Californians have died from the mosquito-driven disease this year, there have been three deaths nationwide, and 16 people in the state have contracted West Nile virus so far in 2010.

“Now that the weather is warming up we may see an increase in the number of birds testing positive for West Nile virus,” said Jack Miller, County Department of Environmental Health director. “People should follow three simple steps to protect themselves from mosquito bites and help prevent mosquito breeding.”

PREVENT Mosquito Breeding: Backyard water sources are ideal breeding grounds for mosquitoes. Residents should dump or remove anything that can hold water, such as potted plants and saucers, rain gutters, buckets, trash cans, children’s toys, old spare tires and wheelbarrows. Mosquito fish can be used to control mosquito breeding in backyard water sources such as unused swimming pools, ponds, fountains and horse troughs. They are available at several locations around the County.

PROTECT Yourself from Mosquito Bites: Protect yourself from the virus by staying inside when mosquitoes are most active especially at dawn and dusk. Wear long sleeves and pants, and use insect repellents containing DEET, Picaridin, IR3535 or Oil of Lemon Eucalyptus when you are outdoors. Keep screens on doors and windows and make sure the screens are in good condition.

REPORT Dead Birds: Vector Control staff will collect and test dead crows, ravens, jays, hawks and owls if they are good test specimens. Dead birds do not need to be reported if they have been dead more than 24 hours; have been hit by a car, shot, or killed by animals; are covered with ants or flies; have a foul odor; or their bodies are not intact.